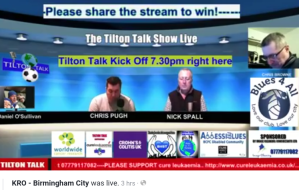 Monday 4th Feb was no different with hosts @NickDJSpall @AWCAIB (aka Mr Fun) directing the proceedings from behind the mics.

Some great points of view were put across as usual from fans with differing opinions but friendly ones with a hint of the usual Bluenose humour thrown in.

Below is just a selection of the hundreds of comments made on the show.

As you can see a wide range of subjects are covered and next week’s show looks like being another cracker with guests David ‘Davo’ Brown and Claire Boden from Birmingham City live in the studio answering fans questions the best they can .

So join fellow Bluenoses and guests in the coming weeks talking all things BCFC between 7.30pm and 9pm every Monday on the Tilton Talk Show 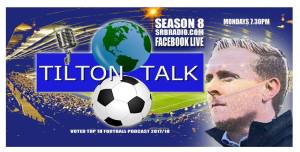