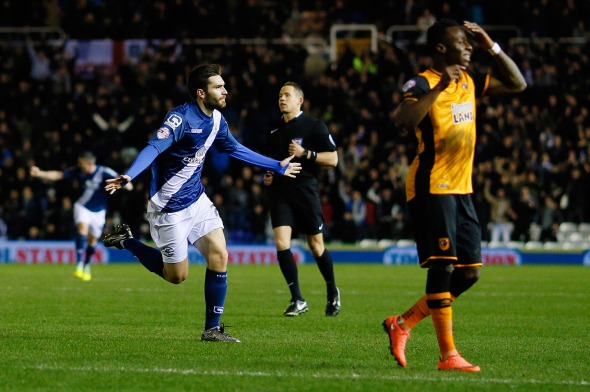 Birmingham City thwarted Hull City’s chance to go top of the league with a superb 1-0 win at St Andrew’s, and took a step towards the top six in the process.

Jon Toral scored the only goal of the match inside a quarter of an hour when his deflected shot found its way past Hull goalkeeper Allan McGregor after a dazzling turn from the playmaker.

The Spaniard was in magnificent form on a wet evening in B9, and Toral’s eloquent touches were matched by back-breaking resilience from the home side’s defence.

Paul Robinson could consider himself lucky not to have been punished for hand ball in the second period, but Blues’ back four – and ‘keeper Tomasz Kuszczak – ensured that the hosts kept a sixth clean sheet in eight outings to claim a courageous three points.

Blues boss Gary Rowett was full of praise for his side who recovered from a 2-0 loss at QPR on Saturday by recording their sixth win out of seven at home.

“We were really good, but we had to be as Hull are a big powerful team who recover their shape very quickly. They’re the most complete team in the division,” he said.

“We had to ride our luck. They hit the post and the bar and Tomasz Kuszczak made a fantastic save for us in the second half, but we created a lot of chances and could have scored more than one ourselves.

“I was pleased with the way we showed what we can do after Saturday, when I was so annoyed that I did not talk to one of the players.”

Toral was restored to the starting line-up in the place of Diego Fabbrini, a move that paid off as Blues flourished when the Arsenal loanee was in possession.

David Cotterill found Toral 30 yards out, who swiveled past Jake Livermore before advancing and driving a low shot towards goal which took a deflection off former Blues defender Curtis Davies and nestled into the corner of the net.

The visitors then threatened to draw level, striking the woodwork twice.

First Livermore saw his thumping effort from outside the box rebound off the post, before Michael Dawson should have scored from Robert Snodgrass’ excellent free-kick but headed against the crossbar.

In an end-to-end encounter, the home side’s next opportunity came quickly – and had it have been converted, would have gone down as one of the best goals ever scored at the famous old ground.

Stephen Gleeson clipped a pass towards Donaldson, who somehow unleashed a devilish overhead kick which not only found the target, but had to be smartly tipped over by McGregor.

The 18,000 inside the stadium did not have long to mull over the Jamaican forward’s sensational effort before Blues almost doubled their lead once more.

Toral again was the danger-man, and after Cotterill’s fine cross, his diving header flew just wide.

Paul Caddis, restored at right-back after Ryan Shotton’s poor performance at Loftus Road, then became the latest player to combine with the effervescent Spaniard – but after neat build-up play, Toral found Jacques Maghoma who hit a wild shot which went well over.

If the first-half was a display of Blues’ attacking talents, the second showcased Rowett’s side’s defensive rigidity as Hull stepped up their offensive endeavors.

Paul Robinson’s block ensured that Abel Hernandez was unable to add to his 17-goal tally, but the next time the captain threw himself in front of the Hull striker’s shot, the away side called for handball.

Referee Stephen Martin waved away their protests although replays showed that Robinson’s arm did indeed make clear contact with the ball.

Kuszczak was then called into action and the Polish stopper proved unbeatable as he pulled off a stunning double-save as well as keeping out Livermore’s low drive.

Hull continued to test Blues’ resolve but the hosts maintained their steely spirit.

Clucas had the chance to restore parity to the scoreline when he was afforded space six yards out, but midfielder wasn’t counting on the determined Michael Morrison, who flung himself into the action to deny the Tigers an equaliser by diverting Clucas’ shot over the top.

Substitute David Davis then hit an attempt wide as Blues held on to claim all three points to push themselves to within a point of the Championship play-offs.