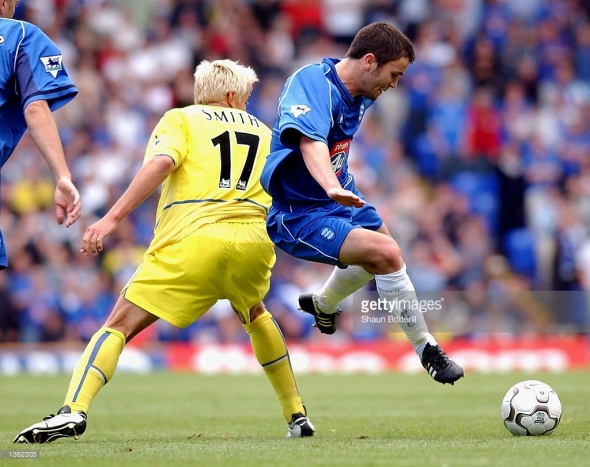 A six-year-old boy is at St Andrew’s with his Dad to watch a Premiership match between Birmingham City and Leeds United.

Blues take the lead on 31 minutes with a goal which would usually be the best of any match – but not this one. Paul Devlin smashes home Robbie Savage’s corner from 25 yards out, but better was to come.

Lee Bowyer equalises for Leeds just four minutes after half-time and the momentum appears to have shifted into the away side’s favour. However, what happens next is a moment of true footballing genius. A strike worthy of any match, anywhere, ever.

Diminutive winger Damien Johnson, who had signed for Birmingham earlier that year from Blackburn Rovers, intercepts a loose pass from the Leeds midfield.

He initially heads to the sideline, before cutting inside and beating his man.

He then sets about dribbling into space and slides the ball into striker Stern John, then Johnson darts on, making it clear he has set up the one-two.

John, turning towards his teammate, slides an inch-perfect pass towards Johnson, anticipating his stride with pinpoint accuracy.

St Andrew’s holds its breath. Surely, surely, Birmingham City aren’t going to score here. Surely Johnson will mishit his shot, sending it wide or over. Or maybe he’ll even fall, denying him any chance of getting any sort of effort away.

But he doesn’t fall, or mishit the shot.

Instead, he runs towards the ball. A Leeds defender throws himself in Johnson’s direction, but he’s already got the shot off.

He’s already opened his body up, with a clear target in mind, an exact spot on the white net where he wants this ball to hit.

At first, it looks as if Johnson may have factored in for too much curl – let’s call it undercurl – and that the ball may end up going wide past Paul Robinson’s post, squandering the chance.

But as the ball nears the goal, Blues fans start to believe. They believe that Damien Johnson – who cost the club just £50,000 – may actually have scored this.

If this goes in, Birmingham are on the verge of their first win in the top flight for 16 years. A two-yard tap-in would carry significance, never mind a truly exquisite strike from well outside the box.

Then, the ripple. The relief. The pandemonium.

The ball settles on the ground at the back of net, Johnson has scored an incredible goal.

It has looped over Robinson, nestling into the far side of the goal. It is a strike of technical perfection. It is a goal that should have been scored by Pele. Not Damien Johnson.

The Tilton erupts, Birmingham’s players run to the fans who greet them with pure adulation.

In the words of Alan Partridge, from the pass, to the finish, it was liquid football.

You can watch the goal, courtesy of Blues’ official Facebook page, below.

Jonathan Spector: “Birmingham have the ability to get promoted” »
« Birmingham City: Looking forward while glancing back