QPR you joking? Blues up to joint 2nd with 2-1 win

Birmingham City rose to joint second in the Championship after a 2-1 victory against Queens Park Rangers, which upheld their fourth-place position.

Blues boss Gary Rowett alluded to QPR’s spending power, remarking on “the fantastic individuals throughout the [opposing] team,” in a nod to his own band of mostly free transfers.

Indeed veteran defender Paul Robinson, who signed for Birmingham as a free agent in 2012, scored his first league goal for eight years to cancel out Matt Phillips’ early Rangers opener, before Paul Caddis converted a second-half penalty to make it three wins out of three for the home side.

After consecutive 2-0 victories on the road, Rowett made only one change to his starting eleven as Jacques Maghoma replaced the injured David Cotterill.

On the opposite wing, Birmingham starlet Demarai Gray had the first opportunity of a tense opening to the match, and  his low drive was well saved by Rangers’ goalkeeper Rob Green.

But it was the visitors that took the lead, despite Blues largely controlling the opening exchanges.

Rangers winger Matt Philipps turned smartly on the edge of the box and hit a curling effort towards the far post which took a wicked deflection off Jonathan Grounds, wrong-footing the helpless Tomasz Kuszczak in Birmingham’s goal.

However, the lead proved short-lived as Blues were on level terms just seven minutes later. 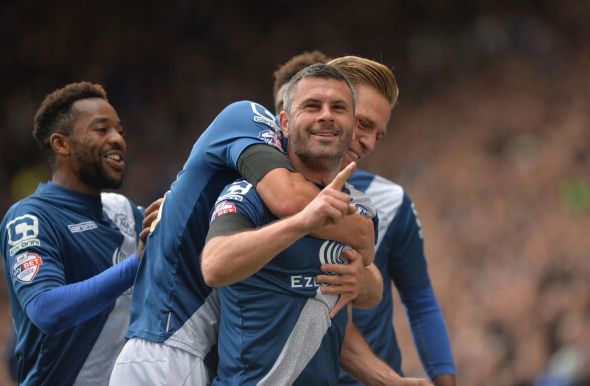 The hugely impressive Maghoma was brought down 30 yards out and, from Gray’s cross, Robinson lost his marker and powerfully headed home to the delight of the club captain and his teammates alike.

Booooom!! 3 points and a goal ⚽️ great team performance by the lads and we move onto Tuesday!! Fans were immense as always #Bcfc #Kro

Kuszczak, who enjoyed a relatively quiet first period, then pushed away Tjarron Chery’s accurate free-kick before Gray went close at the other end.

Just six minutes into the second-half, the Tilton rose to their feet in anticipation of a Blues goal which seemed imminent.

Paul Caddis combined with Stephen Gleeson on the right-wing, before firing a low pass across the six-yard box which narrowly avoided the outstretched foot of Clayton Donaldson and went wide.

Both Maghoma and Gray continued to make the running out wide and as Birmingham grew into the ascendency, they were duly rewarded with a chance from the penalty spot.

The sprightly Caddis again delivered a dangerous cross and referee Carl Boyeson pointed to the spot after QPR defender Nedum Onuoha pushed Donaldson to the ground.

Caddis stepped up and made no mistake in firing home his second goal of the season from 12 yards.

Despite the visitors committing more players upfield, Blues saw out a 2-1 win to consolidate their place in the play-offs.

“We deserved to win and after going a goal down, after losing our previous two home games, that could have put a lot of pressure on the team.

“It is one of the first times we have gone behind and come back to win. We showed a different side to our game and Paul Robinson’s equaliser gave us more belief in ourselves.”

“It is so hard to control people’s expectations. We are joint second on merit. The win must give the players even more confidence after taking on a team which was in the Premier League last season and beat them at home while limiting them to very few opportunities.”

“It is always difficult for a relegated club. It is difficult to have a completely new team. I am not making an excuse but when most of your team come four or five days before the season the pre-season becomes null and void.

“We are not in a bad position. If we win our next two games all of a sudden things will change. I have confidence in the players and squad and I expect us to be in the top half and pushing for promotion. But at times you have to be patient.

“Managing the expectations are huge at QPR and the brunt of the criticism is going to hit me.”

What a great performance from the lads. Buzzing for the old timer @Robbo04pr scoring… And Caddi scoring 💪💥⚽️ #bcfc #kro #19

Blues’ defeat at Hull not cause for concern »
« Birmingham City’s selection dilemmas vs. QPR