Birmingham City kicked off the 2015/16 Championship season with a win over Reading – but were lucky to emerge with all three points at St Andrew’s.

Goals either side of half-time from David Cotterill and Jon Toral gave Blues a two-goal cushion that was very nearly eroded late on.

Nick Blackman pulled one back for the Royals, before Orlando Sa saw his stoppage-time penalty saved by Tomasz Kuszczak in a dramatic 97th minute.

It was the visitors who came close to breaking the deadlock – first Oliver Norwood’s free-kick found the crossbar, then Aaron Tshibola should have scored from close range but his effort was cleared off the line by Stephen Gleeson.

But it was Blues that opened the scoring after 40 minutes, courtesy of a devilish deflection.

Gary Rowett’s side started well after the break and doubled their lead just two minutes into the second-half.

Clayton Donaldson delivered an inch-perfect cross to Arsenal loanee Jon Toral, and the debutant excellently directed his header into the corner from 12 yards out.

However, Blues’ two-goal cushion was short-lived as Reading pulled a goal back approaching the hour mark.

Danny Williams hit a stinging shot which Kuszczak could only parry into the path of Chris Gunter, who crossed for striker Blackman to head home.

Reading, encouraged by their goal, were in the ascendancy and threatened to draw level.

A deep cross found Paul McShane at the back post, but his looping header agonosingly hit the woodwork. 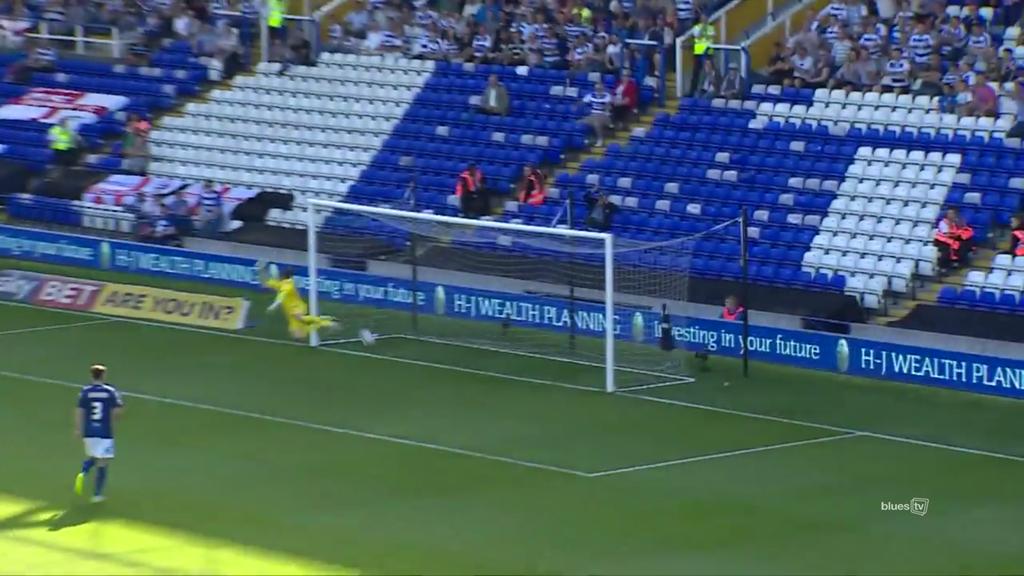 The visitors could have been forgiven for celebrating moments later, as Tshibola unleashed a powerful effort that cannoned off the underside of the bar and appeared to bounce over the line, only for the referee to wave play on.

With Reading committing players forward, Blues could have extended their lead on 88 minutes, but Demarai Gray blasted his shot wide after superb passing play involving Paul Caddis and Andy Shinnie.

However, Birmingham had seemingly lost out on all three points when referee Peter Bankes awarded the Royals a penalty in the seventh minute of added time after David Davis brought down Simon Cox inside the box.

Orlando Sa was the man entrusted to take the dramatic spot-kick and struck the ball low towards the right, only for Kuszczak to get a hand to it.

The rebound fell to Cox who should have found the net, but saw his close-range shot run narrowly wide as Kuszczak closed the angle to the delight of the St Andrew’s crowd who tasted victory in the curtain-raiser.

Blues boss Gary Rowett: “It was an amazing game. It had little bit of everything for the spectator.

“It is the sign of the Championship in some ways. People talk about it as the most unpredictable league in the world.

“I was not overly sure it was a penalty but then Tomasz Kuszczak came up with a moment of experience and brilliance to win the game.”

Reading manager Steve Clarke on the Royals disputed ‘goal’: “I don’t know if it was a goal. Why they don’t have goal-line technology in the Championship, League One and Two I don’t know because it is such a simple thing to do.

“Every club could have it. There is so much money in the game. The professional game could be covered from top to bottom instead of giving all the money to one big superstar player.

“It is a clear decision. It’s either a goal or it isn’t. It works in the Premier League so why not bring it in for the good of the game? Points are vital at every level so these sort of decisions are really important.”