The Booing of Roger Johnson

Roger Johnson was one of my favourite players in what was probably the best team I’ve ever seen down the Blues. Not exactly skilful and not exactly quick either, but this beanpole of a centre-half was as brave as a lion and week after week would go out to war on football pitches around the country; he reminded me of Nemanja Vidic in a way. Obviously nowhere near as good as Vidic as a player, but the partnership he forged with Scott Dann at the back was at one point probably as effective as Vidic and Rio Ferdinand ever managed at Manchester United.

In February 2011, Johnson and his team-mates managed to pull off this club’s single biggest achievement in its history. During the next summer though, following relegation to the Championship, many of those players were shipped off to different clubs whether they liked it or not.

Now many of those players were booed and jeered when they returned to Stan’s with their new clubs, Johnson more than most. In a way I did understand it, though I personally never took part in the booing of any player who was a part of that side. In a way whenever they returned they became hallmarks of the fall from grace the club has undergone in the past few years, they became the salt rubbing into the wounds of many Blues fans. Johnson probably copped more than most because he went down the road to Wolverhampton.

On top of that, his comments at the time about how happy he was to be at Wolves didn’t go down too well with Blues fans, and when he returned with those in old Gold and Black a few months later in the Cup quite naturally many of the fans let him know what they thought of him. But in his defence, despite how galling reading those comments were, what else was he meant to say? How unhappy he was to be at Wolves and how he really wished he was still at Blues? I can only imagine how that would have gone down with his new employers.

Looking back now, I think he would wish more than anything that he could have stayed in that Blues team. Alex McLeish got the best out of him, his team-mates seemed to really appreciate him and the fans used to feed off him. It’s fair to say that since leaving 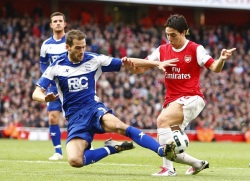 Blues his career has gone downhill. Two successive relegations Wolves were punctuated by stories of his apparent bad attitude, monetary greed and constant drunkenness to the point where he is reviled by the Wolves supporters. During his time at Molineux he went out on loan a couple of times including a spell at West Ham, and I remember him being tortured by Man City’s attack over two legs of a League Cup tie. It was actually quite sad to see, because that was not the player I remember.

He actually had a decent game for Charlton as he seemed to win header after header. You could see him getting riled by the fact that he was getting jeered once again by the home support, and I can see his point; can’t we just let it become water under the bridge now? He did an interview with Blues’ famous cameraman Davo after the game (link here) and seems genuinely baffled by the stick he’s receiving and to be honest so am I; many ex-players have been jeered when coming back to Blues, but I can’t recollect many who have received as long and venomous stick from Blues fans as him. I was looking at people having a go at him yesterday, and it wasn’t mere pantomime style booing but genuine hatred they seemed to hold against him; is that really how we treat our cup winners?

I just thought the whole thing was a bit sour and a left a bit of a bad taste around what was a good win with a good performance. Some Blues fans need to get over themselves; what’s done is done, we all need to move on now and try and remember the good times rather than harking back to the bad ones.

7 thoughts on “The Booing of Roger Johnson”