Defeat to Bournemouth a blessing in disguise?

Blues go to the Goldsands on a totally different animal to the one so pathetically slaughtered by Bournemouth last Autumn. It was officially the worst day St. Andrew’s has ever seen (and boy must there be a few contenders for that “prize”) and after the referee mercifully blew the whistle to end the (mis)match I had given up hope for this season. I thought we were down; in fact I remember being put on Radio WM and stating that my biggest hope was that we didn’t fall through League One into League Two next season. Bournemouth drubbing us had cut us adrift in the relegation zone and it was hard to see a way out even at that relatively early stage of the season.

So that we are now safely ensconced in mid-table is a remarkable position to be in. But was the humiliation of being battered so badly actually a bit of a watershed moment for Blues? Playing Devil’s Advocate, if we had managed a more respectable result against Bournemouth, would Malcolm Crosby have got a game or two more? Heck if he’d managed to get a good result or two (like he very nearly managed at Blackburn in the first of his two games in charge) would he have been given the gig full time? If he had been kept on even a few games longer would the situation have got worse and worse until the point where it did because a lot harder for Gary Rowett to reverse? As it was though, within forty-eight hours of the Bournemouth game Rowett had been appointed manager and I think the shock of getting beat the way we did probably hastened all sides to get on with confirming the appointment.

And I think what happened at home to Bournemouth may have given Rowett some clout and leverage with Panos Pavlakis that he needed help in terms of a budget for bringing players in. His first signing was the same week he was appointed in the form of Michael Morrison on loan (to be made permanent a month or so later) and the big centre-half was outstanding in his and Rowett’s debut when we got a 0-0 draw at Molineux and he’s been outstanding since. There was an impression that we weren’t likely to spend the money required to bring in that type of player whilst Lee Clark was manager, but perhaps the seeming bleakness of the situation Gary Rowett inherited made those who control the purse strings at Blues realise that the manager needed funds to bring in outside help; it’s a theory shown by the fact we have brought in several other established Championship players since then. 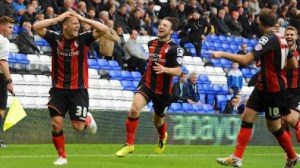 In a sense, I also think getting thrashed like that actually removed some of the pressure on Rowett coming into the club. Expectations of the team were so low amongst Blues fans after getting turned over that no-one would have had a go at him had we continued to struggle so he could come in with enthusiasm and without the fear of cocking everything up that can impinge on a manager who comes into a club that has been going strong before he arrives. I think it was the same for the players to an extent; they could play without fear somewhat because quite frankly things couldn’t have got any worse than they were that day against Bournemouth. On the flip side I’d like to think that the Bournemouth thrashing gave those who disgraced the Royal Blue shirt so badly that day one almighty shock, and gave them a resolve as a collective and as individuals to make sure that sort of thing never happened again.

So yes I think there were good things to come out of what was a horrific defeat, but I still wish it never had happened. We were a national laughing stock that day, and despite our upturn in form since then we still get laughed at. Bournemouth are a very good team (for me the best one in the division by some distance) but they aren’t exactly what you would call a traditional heavyweight of English football. When you look at the Blues record books in twenty, thirty, forty and fifty years’ time it will still be there in black and white that we got stuffed 8-0 by Bournemouth. I don’t hold out too much hope of us getting a result on the South Coast on Monday because as I said we are playing against a very good team who have a lot more to play for than us. I just hope that whatever the result we again show the resilience we have consistently shown since Rowett’s return and at least give Bournemouth the game we so miserably failed to give them last time around.

What have been the big differences since that day in October?