Birmingham City move fourteen points clear of the relegation zone after a 2-1 victory over Rotherham United at St. Andrews.

First-half goals from Robert Tesche and Clayton Donaldson sealed the win as the side recorded a third victory in their last four home matches.

Former Blues’ loanee Matt Derbyshire did pull a goal back for the visitors, but Steve Evans’ men were not able to find an equaliser. 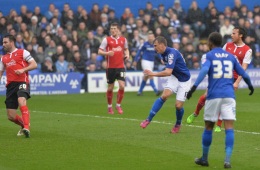 The goal scorer had a strong penalty appeal turned down prior to the hour mark, but referee Dean Whitestone waved away the protests, much to the displeasure of the away side.

David Cotterill was on target the last time Blues took on a side from Yorkshire and the Welshman forced the first save of the match from Rotherham’s Emiliano Martinez.

The winger found space just left of centre on the edge of the area and fired a driven effort towards goal that the goalkeeper could only palm away for a corner.

Blues continued to control the game and found an opener that their play merited through Robert Tesche.

The German made a good run towards the box and was played through by Clayton Donaldson.

The striker’s pass was weighted perfectly for the midfielder to hit a first time effort sweetly into the bottom corner for his first goal since arriving from Nottingham Forest in March.

It was almost two soon after as an unmarked Andrew Shinnie headed over from six yards away.

With the interval approaching, Donaldson did manage to double the lead.

A well struck free kick from Cotterill could only be parried back into danger by Martinez and Donaldson was at hand to take advantage with a diving header.

The striker had one final chance of the half with a good turn and shot from long range that flew just wide, but the home side went into the break pleased with their efforts.

Rotherham came out fighting after the interval and halved the deficit just three minutes into the final 45 minutes.

A mix-up in the Birmingham defense gave Matt Derbyshire a tap in to give the visitors a way back into the game.

Blues held strong while the away side pushed and could have found a third through Cotterill.

Great link-up play between Shinnie and the winger created a chance for the latter, but Cotterill could only send a curling effort well over the bar.

The introduction of David Davis late on made Gary Rowett’s side difficult to break down in the final ten minutes and the team sealed a win that takes them to the 50 point mark.

Tesche had a couple of chances to add to his tally in stoppage time, but Martinez was at hand to deny the German.

Both sides are in action Easter Monday. Birmingham travel to Bournemouth while Rotherham entertain Brighton.

“I’ve watched it back three or four times and I actually don’t think it was a penalty, in my opinion.

“I can understand why Steve would want it given but I’ve watched it and the legs tangled but I don’t think there was a clear foul by anyone, plus the ball is running away. I’m sure Steve will say I said otherwise.”

“We have just seen the DVD. It is as nailed on as they come. It’s a penalty and a red card. If you don’t give them then you might as well give the game up.

“You might as well get a 12-year-old in who has blue blood in his veins to come and referee. I’m not questioning the integrity of Dean Whitestone, I’m just saying he was atrocious today – you can write that in capitals for the Football League.

“We have a lot of respect for the people at Birmingham City but the place went silent when Matt went down, everyone knows we should have been given it.”

Man of the match: Robert Tesche

Defeat to Bournemouth a blessing in disguise? »
« A Fab Signing and Easter Points Hunt