Next season could be one long slog

I was going to do a match report of the Cardiff game for the MiB website, but I had to be honest when I told Oli (the tireless online editor of MiB) that I had very little to write for it. Cardiff were bad, we were diabolical, they scored twice and we didn’t. That was pretty much the be all and end all of what happened on Saturday in South Wales.

All Saturday’s defeat counts towards right now is a pretty bleak looking run of form in the past couple of months. To put our current form into context, from our last twelve games we have won twelve points; in the twelve games Lee Clark took charge of at the start of this season, we got a shade under that with eleven points and that got him the sack. It is fair to say that the burst of form we had when Gary Rowett first arrived is what has saved us from the relegation dogfight this season.

You can’t rely on that sort of burst every season though. Rowett and the players do deserve credit for the way we played in the last two months of 2014, but I think there was also an element of the sort of bounce in the side that can often be inspired by a new manager coming into a football club. The first few months of 2015 are probably painting a far truer picture of where we are as a team. Going back further, the aforementioned upturn in results at the back end of 2014 are in all honesty the anomaly in what has been a couple of years of us being a team struggling in this division.

The reason we have struggled is that we have had over the past couple of years been limited in terms of who we can afford to have on the payroll and in turn that means we can only afford players of a certain calibre or experience. Some people heaped all of the blame for our woes on our previous manager, but whilst he wasn’t blameless he was managing the club with one hand tied behind his back. Gary Rowett has improved the team Clark managed to put together at the start of this season, in that we are a lot more resilient and the way we play is more cohesive because we do have a system that Rowett doesn’t chop and change with the erratic regularity Clark did. But Rowett is still hindered by the limitations of his players in the same way as Clark was and no amount of tinkering will change that.

That our season effectively finished in terms of actually having anything meaningful to play for several weeks ago should mean that Gary Rowett in effect has a lot of time to build for next season, to scout around for players to come in for players to improve the squad and start making a hit list of players currently at the club who he wants to move on. But in terms of doing the former, what sort of market will he be operating in? Will it be the same sort of market Lee Clark was operating in last summer, where we were limited to looking at free transfers and loans with (by all accounts) a wage cap of £5,000 a week? If it is it’s hard to see how Rowett will improve much on what we have because I think Lee Clark and his staff did well to build the team we have in the first place in the summer considering the little money we had to spend, even if it has taken another manager to make them more of a unit. 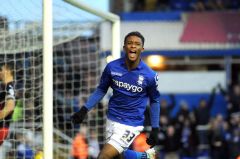 Before actually improving the team though, we may have to replace players who may depart. Some would argue that Dimmy Gray going off the boil since Christmas means that we should have taken the multi-millions Bournemouth were offering in January, not least because we probably won’t get as good an offer in the summer (particularly as there is just over twelve months remaining on his contract). The other two who I would say are prime for picking are Darren Randolph and Andy Shinnie; Randolph is out of contract this summer, and Shinnie is like Gray in that he just as a year left on his deal so any fee for him automatically drops. I would say all three have talents which any Championship team (and possibly even higher) would covet and there are a lot of teams who can offer more than we probably can right now. But how do you replace those three if all three do end up leaving in the close season? Clark and/or his staff did very well to find Randolph and Shinnie in the freebie bin from Scotland (even if LC himself never managed to utilise the latter to any great effect whilst managing him) but those you it’s hard to find the calibre of player those two in said bin.

On top of that possible eventuality, I think we desperately need at least one centre-half – Robbo is heading towards his late thirties, David Edgar’s days at the club appear to be all but over, Gavin Gunning has had massive injury problems throughout his career, Jon Spector’s contract is up this summer (and has also suffered from multiple injuries during his time at Blues) and by all accounts we are struggling to afford to make Rob Kiernan’s loan permanent (a possible indicator of how tight the purse strings are going into the close season). We need someone who we can rely on to do a job every single week. We could also do with a proper goal scorer, a poacher; Clayton Donaldson and Wes Thomas can be profligate when presented with chances in front of goal and Nikola Zigic is yet another player whose deal is up in a few months time (and presumably it won’t be renewed). There are other areas such as centre-midfield and either full-back position where I think we could do with additions to bolster the numbers available, but I would say that the former two areas of the park are where we desperately need to improve no matter who stays or goes.

As stated though, I think we could find it hard to bring in players of the required quality to push us up the table, or even keep us where we are right now especially as next season’s Championship looks like it could be a lot tougher than this one. It doesn’t look like the club is going to be sold any time soon, and with receivers in control of the parent arm of the company nobody right now has any real control over the club save for Panos Pavlakis being a figurehead keeping things ticking over day-to-day in Birmingham; who is going to pump in money for a club they have no real control over to buy players? It’s a good thing in a sense that our season is now over and that Gary Rowett has plenty of time to plan for 2015/16, but ultimately if he’s still operating in the same market has his predecessor was in previous pre-seasons then will it make any difference?

What are you hoping for next season? Which players should brought in and who should be heading for the exit?

Who Stays and Who Goes? Part Two »
« Birmingham City 3 Liverpool 1

4 thoughts on “Next season could be one long slog”