Who Stays and Who Goes? Part One

The injury plagued American has recently found himself in the Blues starting 11 after an injury to new signing Michael Morrison. Previously people have been unsure as to where Spector’s position is; manager Gary Rowett recognised this and simply asked the player himself where he is most comfortable playing to which the American replied that he had played a lot at centre back for West Ham in the Premier League.

Spector is a reliable player with years of experience in the top flight and the Championship. Therefore I would offer him a new one year contract and review it again next season as he is an excellent and versatile squad player whose experience will help the younger players.

Club captain, passion personified. Initially arrived on a one month contract in September 2012 and has gone on to become a crucial figure at the club both on and off the pitch. His mentoring off the pitch is clearly a help to the younger players and he will make a great coach once he retires. I imagine he will be given a new one year deal in a player/coach role and then after that who knows… Either way, it is vital to have his experience around the club.

Signed due to former manager Lee Clark’s connection to Olly Lee’s father Rob, the former Newcastle player. However, last season he became a first team player and was a solid player in the centre of midfield with his passing more often than not finding it’s intended recipient. He’s currently on loan at League 2 side Plymouth Argyle where Blues manager Gary Rowett feels he can develop his game with a view to coming back next season. However, I imagine Lee will be let go at the end of the season in order to bring in a better quality player and I would agree with that decision. 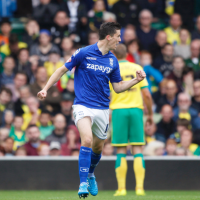 Combative academy product Callum Reilly shows tremendous desire when he plays and has established himself as a very useful midfield player in the last two years. However, with David Davis, Stephen Gleeson and Robert Tesche currently ahead of him in the pecking order he has been allowed to join Rowett’s old club Burton Albion, who are chasing promotion to League 1 under Jimmy Floyd Hasselbaink, on loan until the end of the season. Rowett has stated that his reason for sending the Bluenose midfielder out on loan was for him to get some minutes. I imagine that he will be offered a new contract at the end of the season as he is a decent squad player and I would once again agree with the decision.

The American youth international has had a difficult last couple of seasons which have been marred by injury and being farmed out on loan in order to regain match fitness. He found himself a regular at right back a couple of seasons ago and looked pretty solid. Defensively he is arguably the best right back at the club (Caddis never blocks crosses). However, going forward, Caddis is the much better option and Packwood is not going to get ahead of him. I think with the amount of defensive players at the club, recently limited by injury, we will see the American leave St. Andrews at the end of the season. Personally I think he has good potential which has been identified by U.S.A. National team boss Jurgen Klinnsman but for his career to progress he is probably best finding a new club.

The Blues youngster originally from Ghana secured himself a starting spot earlier this season before being dropped and has not regained his place since. He has apparently been scouted by a few Premier League clubs and clearly has good potential. Next season will be vitally important for him as he will need to kick on if he is to develop into the player that his potential shows. Should and probably will be kept at the club on a long term deal.

The left back has recently been sent out on loan to League 1 Gillingham. Has not had a look in at Blues, playing one game, a thrashing by Leicester last season. With Jonathan Grounds and Mitch Hancox ahead of him in the pecking order for the left back slot it is highly doubtful that Bell will remain at the club and to let him go elsewhere to further his career would be a good idea.

One of a few good young keepers to come through the Blues’ ranks in recent years. Currently the number 1 for the U21 side. Has done well on loan at Lincoln City in Non-League and I imagine he will be offered a new contract. Right decision.

Who would you give a new contract to for next season?

Par Two will be posted tomorrow.

2 thoughts on “Who Stays and Who Goes? Part One”