What type of owner would we want?

To be honest I’ve heard so many times from ITKers over the last few years that we are going to be sold imminently that it’s now got to a point where unless the new owner is standing in St. Andrews’, Tilton in the background with the scarf above his/her head then I simply won’t believe we have taken over. Hope is the one thing that kills you when it is false hope.

On Monday there was news that all the Directors on the Board of BIHL have left or been booted off by the receivers who have now placed themselves in full control of said Board. I have to admit all this stuff goes over my head a bit. I am not a man of economics or business and make little to no attempt to understand the goings on of those worlds. From what I have read it seems it is good news because Ernst & Young now have no obstacles in their way to do certain things and make certain investigations and that should help speed up the process of selling up the club.

We will eventually have new owners one day, whether that be tomorrow, next week, next month or next year. The question is, what type of owners do we want? Short of hitting the jackpot and getting a Man City/PSG/Chelsea type owner who is richer than God himself then what is the profile of the best candidate?

Well even if a person or group of people doesn’t have the access to wealth that a Man City or PSG benefactor has, the first question nearly any fan will ask is how much dough does he/she/they have and that is understandable. Ultimately if you have an owner with a lot of cash (and just as importantly if they are willing to let go of some of it) then you will obviously be able to buy better players, and in theory that should see you shoot up the football ladder. Except for the ones whose wealth is only matched by their madness and their slapdash methods used to run the club; see the Al-Hasawi family at Forest employing six different managers in under three years whilst Forest have simply stayed in the middle of the Championship. Or Vincent Tan at Cardiff, who did finance promotion to the Premier League but over the past few years has made so many decisions which have alienated a huge proportion of the fans there.

People have pointed to those two (amongst many others, including our benevolent now incarcerated ex-President) as to examples of how foreign ownership of our football clubs can often turn sour and some Blues fans point to those sorts of people (as well as those who have run the club into the ground in recent years) as the reason why they’d want the club to return to more local hands. Again I can somewhat see the argument; almost as big a bone of contention with Blues fans as the way the club has been run from Hong Kong in the past few years is the fact that there has been no-one here visible and here to be held accountable for those decisions. Then again you can have owners from your door step who can be just as erratic, just as irresponsible and just as uncaring about the people whose football club they are guardians of; look at the Oyston family at Blackpool for proof of that.

Even if the club did return to more local ownership (let’s face it you couldn’t really get any less local than those who have been running the club until very recently), it wouldn’t necessarily mean it would automatically be a Jack Walker/Jack Hayward/Dave Whelan type who just throws good money after bad at the club for a long time for the love it. That’s not necessarily a bad thing, in fact in a way I would prefer it because it means that the club 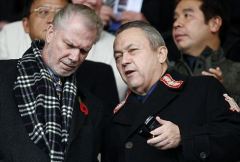 would hopefully be as financially secure and stable possible if it was run as a business rather than a hobby.  People criticised Davids Gold and Sullivan but I think they were on the whole superb for Blues; they rebuilt (most of) the ground, they got us to a cup final, they invested in the team for years as it fought for promotion from the old Nationwide Division One and for a few years at least we were a thriving Premier League club (and on the couple of occasions we dropped down from the top-flight under their ownership we came straight back up). Most of their time at Blues was a period of unstinting progress in one way or another. Yes they probably stayed at the club a little too long, yes they sometimes fleeced the fans of cash far too much and yes they did have a habit of playing up to the media a bit too often and their reputations and antics made us a bit of a laughing stock once or twice. But overall the club’s transformation under them was pretty superb and that was done by running the club on a financially prudent basis.

I think the chances of us finding a benefactor rich enough to bankroll us with a genuine love for the club are slim to none anyway. I don’t know if there are any billionaire Bluenoses who could just speed spend his way to getting us to the Premier League, but the current economic climate in football would make any person like that have to be a billionaire; the days of a millionaire or a multi-millionaire being able to buy any kind of success at the higher levels of football in this country are long gone. If the Jack Haywards or the Jack Walkers of this world took over their clubs now with the levels of wealth they had when they did take over their clubs, I very much doubt they would have been able to simply outspend the other minions like they did in the past. And as Financial Fair Play is becoming more and more prevalent (particularly in our division) I’m not sure they could even if they had the means to do so.

There’s nothing stopping a foreign owner doing that either by the way, but I think I would err towards preferring Blues to be owned by British people based in Britain (for the accountability factor mentioned above). I think the really perfect scenario would be a consortium of local people who may not (in footballing terms) have money brimming out of their ears but have sound business sense and a solid plan. Swansea City are the perfect example; a group of wealthy people (but by Premier League standards as individuals their net worth makes them look like paupers) coming together with ideals and a progressive mindset, and sticking to those ideals as the club rose through the four divisions to the Premier League, a cup win, European football and beyond. I know there was a consortium involving a mad Blues fan in the form of recycling entrepreneur Paul Richardson interested in the club months ago; I couldn’t possibly comment on whether that same group of people are interested who what the composition is of the group, but if they are minded like him with the club’s best interests at heart then they are the sort of people I think could be ideal. People with a genuine passion for the club but people hopefully with the brains and expertise between them not to let passion take control.

But there is always more than one way to skin a cat so I suppose we can’t have too rigid a mindset of who we want in charge. To be honest, unless the new owners start throwing games Harchester United style, they can’t really do much worse than some of their predecessors. Really, all the fans want is a change to give us some kind of optimism for the future.

One thought on “What type of owner would we want?”