That’s Typical Blues was ringing out the upper echelons of the away section at Pride Park for long periods of Saturday’s encounter. And yes, Saturday really was most definitely Typical Blues. 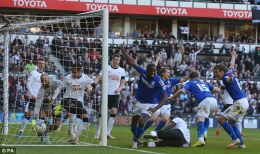 The thing about Saturday’s incredible last gasp comeback is that it isn’t even up there anywhere near the most important late, late goals that Blues have scored in my lifetime. We’ve done it so many times before, often in much more important games, that it now a few days later feels a bit of a damp squib. It effectively meant we got a point when our season was all but over before the game anyway.

In my relatively short lifetime alone we have reached a play-off final, won a cup final and won a big game in Europe in the final seconds. There have been numerous results achieved late, late on against Villa, Wolves and the Baggies. And all that’s without even touching on what happened last season. This club just seems to have it in it, no matter how bad or good the players on the pitch are at any given point, to just keep going and get results when the chips are down, the backs are stuck by superglue against the wall and the fat lady is getting her mic out.

To be quite frank though, we were actually fairly awful for the first ninety-three minutes. Derby were controlling the game, and whilst the Blues players were huffing and puffing they were doing so with very little effect. Jamie Ward got a first midway through the first half, tapping in an open goal after Randolph had parried away a Johnny Russell shot. Tom Ince got the second just after the interval with a mazy run and finish and to be honest that should have been that. Derby could have stretched the lead further, hitting the bar later on in the first half and having an effort spectacularly cleared off the line midway through the second. But in all the Rams seemed to be fairly content to see the game out and Blues seemed to have little to no idea how to stop them doing so.

Bringing on Clayton Donaldson, Demarai Gray and Wes Thomas in a relatively short space of time brought much needed pace and power to the Blues front line, particularly as two of them came on for the ineffective Lee Novak and the woeful Lloyd Dyer. It looked like those changes would be too little too late though, until Blues won a softish penalty deep into injury time. Caddis smashed it away, but surely it was a consolation?

Well as you must know by now, it wasn’t. The goal seemed to stun Derby, and you could tell that they didn’t expect to be woken from the relative slumber of just coasting to full-time. The fans in white and black who were previously bouncing in anticipation of another three points and going top of the table were now whistling, imploring the referee to bring the contest to an end. Winning a free kick right on the half-way line further exacerbated those whistles; where was the referee getting all this time from? He’d indicated a minimum of three minutes of added time (emphasis on the word minimum) at the end of the ninety, and now we were easily into the fifth minute of that added time. Randolph was up, only adding to Derby nerves, but the flicked on delivery went all the way through to Lee Grant in the home goal who managed to push it wide. Our last chance seemingly gone…well not quite; the resulting corner by Cotterill went all the way to Wes Thomas at the back post. He hooked it high in the air, and there Donaldson headed/shouldered/bundled/accidented it into the net. Cue pandemonium.

It really was just Typical Blues.

What type of owner would we want? »
« The revival of Jonathan Spector

One thought on “Typical Blues”