The revival of Jonathan Spector

To borrow a famous remark of Brian Clough’s about Leeds’ legendary midfielder Eddie Gray, if Jonathan Spector was a racehorse he would have been shot by now.

For that reason I was rather astonished when in the summer of 2013 we handed him a brand new two year contract, at a time when every single penny that could be saved was being saved at the club in areas both on and off the pitch. You couldn’t hope to build a team around him because it was almost inevitable that he was going to be on the treatment table as much if not more often than he was on the pitch. I can only assume/hope that the contract he was given two years ago was leveraged so that his earnings were linked heavily to the amount of games he was able to play for Blues.

But recently he has slotted in the middle of our back four, and I think he’s done rather well. I have to admit when he came on for the defensive pillar that is Michael Morrison at Sheffield Wednesday I feared the worst; how would he cope in his first appearance in several months (another injury lay-off) when Wednesday were simply lob bombing balls to the big bloke up front and bombarding our penalty area all evening? The answer was very well, and he was a big reason why we came out of that game with a nil-all draw. The Saturday afterwards he had another excellent game at home to Norwich where we again drew nil-all. He seemed to strike up an understanding with Robbo, but that cracked when we shipped eight in two games at Brighton and Ipswich, but it was Robbo who was taken out and Specs has now developed a new understanding with Rob Kiernan at centre-half which has seen us keep two clean sheets and secure two successive home wins against Brentford and Blackpool, which have effectively secured our Championship status for another season. 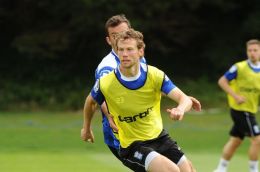 I think he’s potentially more suited to the centre-half role because he may have lost a yard of pace or two as a result of all these ailments he has had over time. At full-back he would have to contend with a lot of lightning quick, nippy wingers who he may struggle to keep up with. In the midfield working from box-to-box for ninety minutes may well be something he’d struggle to do and in addition the muck and bullets of a midfield tussle may further heighten the risk of an injury to a player who seems to be made of tissue paper and glass. I also think that he is able to read the play exceptionally well, and several times that has been obvious when he has made last ditch tackles and clearances in games to stop a dangerous attack dead in its tracks. At centre-half the speed of the player’s brain is just as important as the speed of his feet if not more so, and you can see in games how well-bred he was at the Manchester United finishing school and how he managed to play many games at the highest level for several clubs and his country. The only thing I’d hold against him is that sometimes in recent games when the ball has come to him he’s had the first touch of a brick wall, but nobody’s perfect.

The question now is whether to extend his stay at Blues. As this season seems to be inevitably meandering towards a mid-table finish, Gary Rowett insists there is still a lot for the players to play for and I definitely think of the those things players will be striving towards are new or improved contracts. Spector’s name must surely be way up on Rowett’s list of undecideds in terms of who he will be offering fresh deals to. I personally would still err towards not giving him a contract simply because you can’t be sure if he will be available to play in even half the games in a season and whilst our money situation seems to have improved in terms of the players we can afford (and could improve further if Lord save us we actually get new owners any time soon) I don’t think we are going to be flush enough with cash to pay for someone who for a lot of the time will probably be a passenger. But if he can stay injury free between now and May and keep up the form he has been showing, then that may be enough to persuade GR to hand him a fresh set of forms to sign.

What are your thoughts on Jonathan Spector’s return to the side?

2 thoughts on “The revival of Jonathan Spector”