Now I hope to God this season doesn’t end as badly as the last one did. But in my lifetime Blues have had a track record of being in seemingly comfortable league positions only for collapses in form to see us sucked into the dogfight at the bottom. And with the exception of last season’s great escape those dogfights never ended well. Whilst I wouldn’t say that I am in outright panic mode right now, I am once again casting half an eye towards the bottom of the Championship table.

I thought a few weeks ago that changes needed to be made to the way we played. We had become too predictable and teams were able to shut us out. Gary Rowett has tried to shift players around, particularly going forward with Gray, Dyer, Shinnie and Cotterill all making way from one of the three slots behind the striker in the starting line-up. But we are still near enough playing exactly the same system as we did when he got here and teams have figured us out.

But in fairness to Rowett, I think playing jiggery-pokery with the team would only affect a limited amount. Quite simply, our form is mainly down to the players he has at his possession. In my opinion most of them were busting a gut when he came in, were lifted by the positivity that surrounded his arrival and playing way, way above themselves. That was only going to go on for so long though and now many of their limitations as individuals and as a collective have once again become apparent.

Considering that we have the second lowest wage outlay in the division and have a squad mainly made up of freebies from the lower leagues and cast-offs from elsewhere then being fifteenth in the division is arguably an over-achievement. No amount of tactical manoeuvring will change the simple fact that many teams in this division will have better players than us simply because they can afford them. I’ve said this for a long time now. 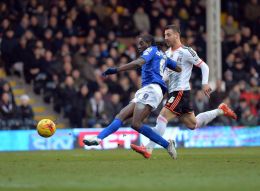 When Clayton Donaldson misses two sitters at Fulham and another in the dying seconds at home to ‘Boro then there isn’t a fat lot any manager can do about that. When Paul Caddis misses a penalty on the stroke of half-time that could put you ahead at Brighton and you subsequently concede several ridiculous goals then there isn’t a fat lot the man in the dugout can do about that either. When two of the best players in your team in the form of Michael Morrison and David Davis both pick up injuries, two players who are key to what Gary Rowett has tried to build his team around, then that’s just bad luck.

The only thing the manager could do at this point is bring in a player on loan or on a free. But as the numerous short-term arrivals who flopped last season and as players like Brek Shea or Lloyd Dyer are showing this campaign that sort of market is temperamental and unreliable. Besides which even if Rowett did want to bring someone in now that the holding company (and from what I can tell the people who control the money supply) is now in the hands of the administrators I think it’s not at all clear what, if anything, Gary Rowett has to spend in the marketplace.

Looking at our next fixtures, and they look very tough. Ipswich, Brentford and Derby are all well in the hunt for promotion and whilst many think that Mr Clark returning to Stan’s with his Blackpool team will be a walkover there were many people who thought that before we played them in December and ultimately Clark and his side shoved that cockiness right back down their throats. Unless we can pull off some results then what is at the moment a blip suddenly starts to become a crisis.

Still I’m fairly confident (assuming the Football League don’t put a points deduction on us for BIHL going into receivership) that we can steer clear of choppy waters this time around. The team, though not the most talented in the world, is at least free of the turbulence that surrounded it last term when we had players going out of the club on what seemed like a daily basis. We just need to regain some consistency and regain some of the solidity that was shone like a beacon when Gary Rowett first came; if we can do that then we will be fine.

What are your thoughts on the run of form the side are on at the moment?

A Time of Change? »
« Rigid Rowett

One thought on “Déjà vu”