Avoiding complacency the key against Blyth

There are Blues fans worrying about Saturday’s game – it is the FA Cup after all, and as any punditry rent-a-gob will tell you anything can happen in the FA Cup. There are also Blues fans who point to past FA Cup defeats against the likes of Altrincham (when we were a top flight side) and Kiddie Harriers (when we were at the level we are now) as reasons to be edgy about facing Blyth Spartans on Saturday. 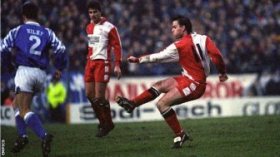 But when we played against Altrincham and Kiddie way back yonder they were two top non-league sides, sides who would probably have more than held their own in the Football League. Blyth aren’t in that category; they lie in 16th place in one of the regional divisions that make up the third tier of non-league football. To put that into context, that’s two places below Halesowen Town and thirty-three places below Solihull Moors (not counting the fact that there are two other regional divisions at Spartans’ level). We aren’t talking Barnet, Bristol Rovers, Macclesfield or Grimsby Town, non-league sides with a proper Football League pedigree doing well in the Conference; if we were I would be wary of Saturday, but Blyth just aren’t anywhere near that level.

To be quite frank, anyone who we have given a contract to play for us should be able to take the field on Saturday and be a part of a team that runs out comfortable winners. The only reason we can possibly struggle is if our attitude isn’t right; if we think that we can turn up and Blyth will roll over, or if we simply don’t fancy battling on what will be a freezing cold Saturday on a bumpy pitch. The first ten or twenty minutes will see Blyth’s players trying like beasts, kicking players as much as the ball. If we get through that, then gradually their intensity will drop and we should pick them apart over ninety minutes. But if they see that we aren’t up for the fight, if they sense blood, then their tails will pick up and suddenly what should be a fairly routine afternoon for us could become very tricky. The players have to be just as focused as they would for any other game, and if they are we will come through the tie unscathed.

If anyone’s attitude has been off the mark by the looks of things though, then it would be the audible attitude of some of the Blyth players when the draw was announced. For example Stephen Turnbull, a midfielder who got a goal when they beat Hartlepool in the last round, referred to drawing us as an “anti-climax”; he may well have been disappointed not to draw one of the very 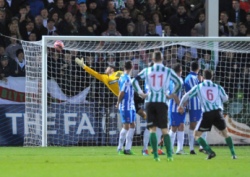 biggest fish, but Blyth have still drawn a big Football League club that will draw a capacity crowd on Saturday – how often before has he found himself in that situation as a non-league player? And even if they had drawn one of the really big sides; does he really think that Louis van Gaal was going to send his first team to Croft Park, or Jose Mourinho or Arsene Wenger or come to that any other Premier League manager? In fact come to that does he really think we will be sending our first choice team out on Saturday? Nevertheless we are still the biggest club he will probably play against in his whole career, and he will be playing against several internationals whatever team we put out; how often has he done that before? If I was Gary Rowett, if our players needed any extra motivation to win on Saturday I would pin what Turnbull said all over the dressing room wall.

What team would I put out if I was Gary Rowett though? I would probably change the entire XI from the one that has played so well in recent times. We have players who need game time, and players who should have a point to prove to try and force their way into GR’s thinking. On top of that several of our fringe players; Mark Duffy, Lee Novak and Wes Thomas spent a lot of the early part of their respective careers in non-league football, so they know better than anyone what Saturday will be like. My team would be:

Now it may seem a bit strange saying we should avoid complacency and then change the entire team, but as I said these players have a point to prove. There is more than enough quality and experience in that team to turn over Blyth as long as they are switched on. I think most people would play Zigic from the start, and I was tempted to put him in myself, but Zigic is still miles from being match fit and because of who he is I think he

would be a focal point for Blyth to harass and kick lumps out of; probably the last thing he needs is to get a knock from some clogging defender. On top of that big strikers, though few quite as big as Zigic obviously, are meat and drink to non-league defenders because big centre forwards who the ball is lumped up to is what they face every single week. But the pace and movement of the likes of Arthur and Thomas will be something different to what they would usually face and something I think Blyth would find uncomfortable. I would leave Zigic on the bench to be brought on if need be.

All in all though whatever team we put out, as long as the attitude is right we should have no real problems. The players should be thinking of Saturday as a great chance of going further in the competition; the romanticist and fantasist in me has already started thinking about how far we could go in the competition. Should we ease through on Saturday and maybe get a favourable draw in the next round or two, then suddenly you could find yourself in the Fifth Round or the Quarter-Final, and from there anything is possible.

You can read more of Nat’s thoughts on Blues on his blog: http://nattubes.wordpress.com/

One thought on “Avoiding complacency the key against Blyth”