January– Blues stretched their unbeaten run to 10 games on New Year’s Day but had to settle for a point at St Andrews against relegation rivals Barnsley. The run ended at the hands of Brighton as Blues fell to a 1-0 defeat. This led to a dip in the form for Lee Clark’s side and, apart from an FA Cup 3-0 win against Bristol Rovers, three more defeats followed in January. The worst of which coming at home to bottom side Yeovil Town. There was some hope for Blues fans as Clark made a flurry of signings at the end of the month including Federico Macheda, Emyr Huws and Tyler Blackett.

February– A positive start to the month for Blues as a changed line up managed to come back from 3-1 down to rescue a 3-3 draw at home to promotion chasing Derby County. A debut goal deep into injury time from new-boy Macheda instantly made him a crowd favourite. He followed up his immediate impact by grabbing both goals in the away victory at Charlton. Two defeats came after this, away to Watford and at home to Huddersfield. Blues were still yet to find a first win at home since October. The month did, however, end on a high as Clark’s men snatched a crucial victory at Blackpool, Lee Novak hitting a brace. New loan signing Jordon Ibe impressed after coming on as a substitute in the second half.

March– A busy month saw Blues play a total of seven games in the Sky Bet Championship in March and the hectic schedule played a big part in the teams’ downfall that month. Just four points were collected from those seven games. The only win away at Millwall did prove to be an important win after five defeats in the month for Clark’s side. An ever growing problem was proving to be the home form. Still no win at St. Andrews since October and their away form became crucial in their fight for survival.

April- With fear of relegation increasing, it was important that Blues got off to the best possible start in April. They did just that after coming from a goal behind to defeat Doncaster 3-1 at the Keepmoat Stadium. Their ninth away win of the season. This win was perhaps the game that decided the fate of either Birmingham or Doncaster. Five straight defeats saw Blues slip into the relegation zone. The home game against Wigan at the end of the month was the chance for Blues to keep fate in their own hands. But, a 1-0 home defeat meant, that if they were to stay in the Championship, they were relying on gaining at least a point at Bolton and also a win for Leicester against Doncaster due to Blues’ superior goal difference. 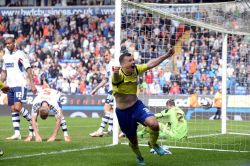 May– The month that would decide whether Birmingham City would be relegated to League One or regain their status as a Championship club. Just one game of the season remained. A travelling contingent of 3,800 to Bolton witnessed what might possibly be the greatest escape from relegation in league history. Birmingham trailed 2-0 to Bolton Wanderers but, a goal from Nikola Zigic and a stoppage time equaliser from Paul Caddis, saw Blues escape relegation narrowly on goal difference thanks to Leicester’s 1-0 win v Doncaster.

June/July– Lee Clark began to re-build for the 2014/15 season. Again, there was a huge turnaround in players as Clark brought 12 players in over the course of the summer and many more departed including cult hero Nikola Zigic and fan favourite Chris Burke who joined Premier League chasers Nottingham Forest. Blues won all of their four pre-season friendlies in July comfortably without conceding a goal.

August– Blues played their final pre-season friendly before the new season. A 3-1 win against Inverness at St Andrews set the side up nicely for the start of the season. The season began with a 2-0 away loss at Middlesbrough but this was shortly followed by a first home league win (1-0 v Brighton) in 10 months after failing to win any of the previous 18. Sandwiched in between this was a Capital One Cup success against League 2 side Cambridge which needed extra time before Paul Caddis and Mark Duffy sealed a place in the next round for Clark’s side. Just two points out of the next three league games also saw Blues end the month with a 4-0 hammering at Wigan as well as the end of the Capital One Cup run at the hands of Sunderland.

September– The unbeaten home run in the league continued with a 1-1 draw against Leeds in front of the Sky Sports cameras. But, the run eventually ended three days later against Sheffield Wednesday. The Owls running out 2-0 winners in a match where Lee Clark’s side were disappointing to say the least. The next two games saw Blues pick up just one point and they were in desperate need of a win. The second win of the season and the first away from home finally came at Millwall where goals from Clayton Donaldson, David Cotterill and Wes Thomas saw Blues claim a morale-boosting victory.

October– On the back of the win at Millwall, Blues drew 1-1 at unbeaten Charlton in which they had the large share of possession and chances. After 12 games into the season and only 11 points on the board, fans became increasing frustrated with Clark. It all came to an end for him after the team’s third home loss in a row, a 1-0 defeat to rock bottom Bolton. Clark was sacked on the Monday following the match. Malcolm Crosby and Richard Beale were put in charge for the games against Blackburn and Bournemouth. A narrow 1-0 defeat at Ewood Park was shortly followed by perhaps the clubs darkest day in recent years. An 8-0 home loss to Eddie Howe’s Bournemouth saw Crosby’s short time in charge end miserably. Change couldn’t come quick enough and, with the team in the relegation zone, ex-defender Gary Rowett was appointed the new manager of Birmingham City.

November– A new month, new manager and a fresh start. Gary Rowett’s first match was none more than a Midlands derby against Wolverhampton Wanderers live on Sky. Rowett’s side frustrated the Wolves team and managed to take a well-earned point away from Molineux. The next four games produced what Blues fans would have seen beforehand as unimaginable. Three wins and one draw made it a magical month for new boss Rowett as he was nominated for Sky Bet Championship manager of the month and Darren Randolph was nominated for player of the month. The ‘Rowett Revolution’ was well under way.

December– 11 points from 15 in November set the standards for December. Blues travelled to Blackpool hoping for a fourth win in six against former manager Lee Clark. However, Rowett’s unbeaten run came to an end as a lacklustre performance saw the side fall to a 1-0 defeat. The perfect response was needed and the team produced. Rowett’s men hit a Reading side short on confidence for six (6-1) and teenager Demarai Gray claimed a hat-trick. The team then travelled to Huddersfield and made it back to back victories as David Cotterill’s free kick gave them a 1-0 win. A first home defeat for Rowett came on Boxing Day as the team were trounced 4-0 by an impressive Derby County side. Ex-Blues loanee Jordon Ibe caused the full backs problems all game and opened the scoring in front of St Andrews’ largest crowd of the season to date (23,851). Another response was needed and with the quick turnaround during the festive period, Blues were given the opportunity to do so just two days later at Stuart Pearce’s Nottingham Forest.  Ten rampant first half minutes saw Blues clock up a 3-0 lead going into the break. This was enough for Rowett’s side as they weathered the Forest second half storm to clinch a 3-1 victory in front of the Sky Sports cameras. In just two months, Rowett has transformed what was a beaten side with zero confidence and lifted them out of the relegation zone and up to 14th place. A perfect way to end 2014 and let’s hope that Gary Rowett and his side can continue their fine form into the New Year.

How do you assess the year for Birmingham City?

You can read more of Luke’s thoughts on his blog: http://luke96turner.wordpress.com/