It may have been Boxing Day, but a ruthless Derby County failed to show any Christmas spirit after running riot at St. Andrews.

Two goals in each half gave the Rams a four-goal victory and led to Gary Rowett’s first home defeat in charge of Birmingham City. 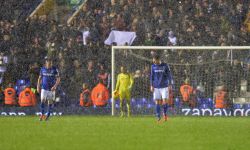 In front of the highest attendance of the season, Blues seemed to have a poor day at the office, looking shaky in defence and creating very little going forward.

As the second highest scorers in the league this season, Derby continued their good run of form in front of goal with the opener inside ten minutes.

Former Blues’ loanee Jordon Ibe weaved his way through a couples of challenges inside the box and hammered home into the roof of the net for the winger’s fifth league goal of the season.

The home side looked to respond with David Cotterill testing Lee Grant in the Derby goal with an effort from 30 yards, but the Rams doubled their lead midway through the first-half.

Following a tackle from Stephen Gleeson on Johnny Russell on the edge of the Birmingham box, striker Chris Martin stepped up and whipped his free kick crisply past Darren Randolph for a fourth league goal in as many matches.

With Birmingham looking helpless in the first 45 minutes, Gary Rowett introduced Nikola Zigic and Wes Thomas to find a way back into the match and the latter almost did just that.

ok a ricochet which fell kindly at the feet of Thomas. The striker’s left-footed strike forced a good save out of Grant when it look destined to find the bottom corner.

Rowett’s men thought they had a decent penalty shout when Thomas seemed to be pushed to the ground by Craig Forsyth, but referee Chris Foy waved away the protests.

The left-back went on to make the home side pay and secure the three points for Derby with ten minutes to go with a goal from 20 yards out on his weaker foot.

A final nail was knocked into the coffin when Russell capitalised on Jonathon Grounds’ mistake as the Scot found the bottom left corner in injury time.

The win moves the Rams up to 3rd while Blues drop to 16th.

In the next round of games, Blues travel to Nottingham Forest while Derby entertain Leeds United.

“From the beginning we were always in control. We dug in when we had to on occasions.

“We have talked about being ruthless and they were and it could have been a lot more. I couldn’t fault how we want to play and it was a great result.”

“I actually thought Derby were the most clinical and threatening side that we have played in the last eight we’ve played.

“They showed their quality and class. Their wide players were a constant threat throughout the game.”

Man of the match: Jordan Ibe