A fine free-kick from David Cotterill guided Birmingham City to a 1-0 victory over Huddersfield Town.

The Welshman’s second-half strike was all that separated the two sides at the John Smith’s Stadium and earned Blues their fifth win under the reign of Gary Rowett in eight matches.

The defeat also sees a seven-match unbeaten home run come to an end for the Terriers and drops them down to 20th in the league table.

It took just seven minutes for the home side to create the first chance of the match. Harry Bunn cut inside and looked to test Birmingham goalkeeper Darren Randolph early on, but his effort was hit straight at the feet of the Irishman.

Blues began to settle down in the game and looked to Demarai Gray to be the catalyst in anything they created. Unfortunately, the previous week’s hat-trick hero wasn’t able to provide the spark the side were looking for in a fairly ineffectual game for the winger.

The teenager did create a chance for David Davis though and the midfield was unable to find the target from just outside the area after making a good run past a couple of Huddersfield attempted tackles.

The away side had Randolph to thank for a wonderful save from Grant Holt before the interval to deny the Terriers a first-half lead.

Sean Scannell’s miscued shot fell kindly to the former Aston Villa loanee inside the six yard box and the goalkeeper made a great instinct save to prevent Holt’s left footed drive from opening the scoring.

As half-time approached, David Cotterill made room for an effort slightly inside the box, but he hit his shot straight into the hands of Alex Smithies.

Blues seemed to come out with an extra spark in the second-half. The opening 45 minutes was similar to the Blackpool match where Birmingham looked to frustrate the home side and played directly to Clayton Donaldson, but after the break they played on the front foot and kept the ball on the ground with a higher intensity.

From a well worked corner, Cotterill fired well over the bar following Stephen Gleeson’s quick thinking to play a low cross to the Welshman on the edge of the area. 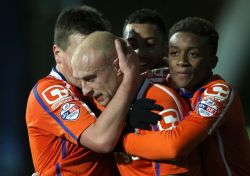 The 27-year-old redeemed himself soon after, scoring his fifth goal of the season.

Following a foul on Donaldson 25 yards from goal, Cotterill stepped up and fired home superbly.

His effort may not have been into the corner, but the movement and late dip on the ball made it extremely difficult for Smithies and gave Blues the opening goal in a scrappy game.

Huddersfield’s Chris Powell responded by bringing Nahki Wells and James Vaughan on, but it did little to bring them back level in the final ten minutes.

Third substitute Joe Lolley forced a good save from Randolph late on in stoppage time and the goalkeeper was more than equal to it.

The win sees Blues move nine points clear of the relegation zone in time for Christmas, a far cry from where the side were when Rowett took over.

Birmingham take on Derby County at St. Andrews in their next match while Huddersfield take a Boxing Day trip to Rotherham United.

“The teams were either going to cancel each other out or a moment of quality would decide it, and that’s what happened.

“We had a few chances, particularly towards the end when we were chasing the game, but we were beaten by a set-piece. We have to channel our disappointment and take it into the next game.”

“As a gritty away performance to follow up a magnificent result at home, you couldn’t ask for more.

“I’ve told them that we have to find other ways to win games. I just wasn’t expecting it to be a thunderbolt.

“I was just about to take off David Cotterill, as he wasn’t as impressive as he has been in recent games, but that was a moment of brilliance. It’s what you get from a player like that.”

Man of the match: Michael Morrison

Rammed: Blues outclassed by Derby »
« Time for a BIHL re-think?