What a difference a month makes in football.

Since Gary Rowett’s arrival to St. Andrews, Birmingham City have gone from strength to strength.

Last weeks victory over Rotherham pushed Blues out of the relegation zone for the first time since Lee Clark’s sacking in October and a positive result against Nottingham Forest would cap off a fantastic first month for the new manager.

At a Zapaygo event organised by the Blues Collective and the club and hosted by the Royal George, Blues captain Paul Robinson spoke about how good the start has been under Rowett and the win at Rotherham. 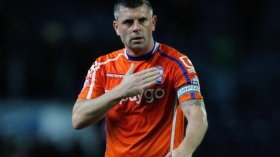 He said; “It’s been brilliant so far. The lads are all enjoying their football again and we’re all feeling confident in what we are trying to achieve this season.

“We’ve started winning games and we feel we can beat any team at the moment.

“The Rotherham game was a fantastic all round performance and one of the most satisfying victories since I’ve been at the club.

“It should have been by more than one goal because of the amount of chances we created throughout, but you take any result as long as you come away with three points at the end.”

Not only have the side been unbeaten since Rowett joined from Burton Albion, but the defence have conceded just one goal in his first four games in charge.

Centre-half Michael Morrison was Rowett’s first signing and has formed a solid partnership with the Blues captain.

Robinson feels the better defensive record is no coincidence and puts a lot of it down to the higher intensity of the training which improved has improved the fitness levels of the players ; “For me as a defender, it’s great we are starting to keep clean sheets and looking organised at the back.

“It means that we can always pick up results and we win games when the strikers find the back of the net, something they are starting to do now.

“The training has been more intense and it’s paying off on the pitch because our fitness levels are improving and we aren’t tiring towards the end of games anymore.”

“The three clean sheets in four games show just how good our defence is currently and how well Mozza (Michael Morrison) has done since he arrived.

“He’s a competitor and he knows the league very well. You need these sorts of players in your side who have that experience and can also perform week in, week out.” 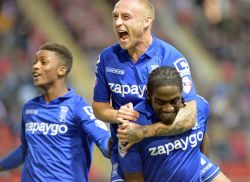 In the last three games, Clayton Donaldson has scored more goals than he had in the previous 15 matches.

Andrew Shinnie has also started to impress recently and the skipper believes his is down to the man-management of the new boss; “Some of the players who weren’t doing well previously have been given a clean slate and are now playing with confidence.

“Claytz (Clayton Donaldson) was going through a period where he couldn’t find the net and he’s turned the corner and is looking a top striker at this level.

“Shins (Andy Shinnie) is getting fitter the more he plays and has been different class for us since the new gaffer has come in. Hopefully he’ll keep doing that and show the fans how good he really is.”

The side expect Nottingham Forest to be a tougher test to Rotherham after winning their last two games, including a 3-0 victory over Wolves.

But as Robbo rightly said; “We feel we can beat any team at the moment.”