Birmingham City stretched their unbeaten run to four game under new boss Gary Rowett with a 1-0 victory at Rotherham United.

A second-half strike from Clayton Donaldson was the difference between the two sides at the New York Stadium and sees the away side move out of the relegation zone for the first time since late October.

Rowett’s men hit the woodwork on a couple of occasions, but Donaldson’s third goal in as many games guided them to an important three points.

The first-half was mainly dominated by Blues and they could have been ahead early on when Stephen Gleeson’s free kick from 25 yards out was well palmed away by Rotherham goalkeeper Adam Collin.

Since Rowett’s arrival, one man who has had a change in fortunes is Andrew Shinnie and the Scot went close with an effort that came back into play off the woodwork.

The attacking midfielder came inside from the right, moved the ball back onto his right foot on the edge of the area and his curling effort couldn’t find the net after hitting the wrong side of the post.

Almost straight after, Donaldson came close when put through on goal, but his shot was well saved by Collin, even though he probably should done better from the position he put himself in.

But the home side started to get into the game more after moving to a five-man midfield with Johnson Clarke-Harris moving to the left wing.

Millers giant striker Alex Revell was becoming a real handful for Paul Robinson and Michael Morrison, but wasn’t able to get any chances away at goal.

David Cotterill went close to scoring spectacularly from 30 yards out just before half time, but his thumping effort crashed against the crossbar and left Collin helpless in the Millers goal.

After the break, Blues still carried on creating chances for themselves and Donaldson came inches from opening the scoring.

Gray recieved the ball on the left hand side and played a great ball across the six yard box, but the striker just couldn’t get his toe on the end of it.

Not long after the hour, Donaldson did manage to find the net for his fifth league goal of the season. 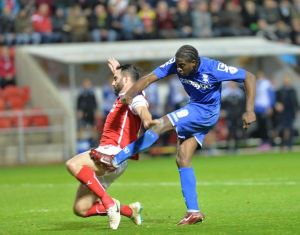 The striker held up the ball well in the centre circle before laying off Shinnie.

The two played a one-two (or a “to me, to you” as it might be known in Rotherham, the birthplace of the Chuckle Brothers) which saw Donaldson break through on goal with just the goalkeeper to beat.

His shot was fired straight at Collin, but was parried back into Donaldson’s path and made no mistake the second time.

The goal seemed to wake the home side up a bit, knowing they would drop into the relegation zone with defeat, and Paul Green should have leveled things up with 15 minutes to go.

A long free kick was headed down by Revell and the ball dropped kindly former Derby County and Leeds United midfielder, but his effort was dragged well wide when it looked easier to find the target from eight yards out.

More pressure came from the Millers late on and Blues held strong to record their first away win over Rotherham since 1965.

With the victory Birmingham move up to 19th, while Rotherham drop to 22nd.

In their next matches Rowett’s side take on Nottingham Forest and the Millers face Blackpool.

“I think it was the most complete performance that we’ve had since taking over, I thought we played with really good control and some good composure.

“It was important that when we needed to we picked good opportunities to get into those little spaces.

“We are really pleased with the way we went about things today. You always worry that maybe a poor performance is round the corner after three games but I think the fourth one was the best so far.”

“I think it was the poorest performance from us that I can remember for a while. If that’s our performance levels it’s not going to be good enough for this league that’s for sure.

“We look at ourselves and it was disjointed. The central defensive pairing have been a rock to what we have achieved in the last couple of years but today it looked like neither of them had ever played football.”

Man of the match: Andrew Shinnie 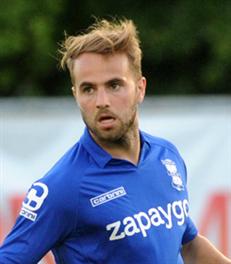 The re-emergence of Andy Shinnie »
« The Missing Men