Another match under Gary Rowett and another game to add to the unbeaten run.

Birmingham City made it three matches without defeat under the new boss with a goalless draw at home to Cardiff City.

Wes Thomas had the ball in the net just after the hour mark following a great run and cross by fellow substitute Demarai Gray, but it was disallowed for offside. 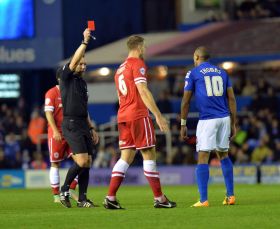 The striker was in the thick of the action late on for violent conduct after an altercation with Cardiff defender Sean Morrison, the fourth Blues player to be sent off in six games.

It was the Bluebirds who had the opening chance of the match as Adam Le Fondre broke through on goal and his effort was well saved by the foot of Darren Randolph.

Blues had good spells of possession during the first half and just couldn’t find the final ball to create chances.

David Cotterill’s free kick that flew a yard wide from 25 yards out was all the home side could muster in the opening 45 minutes.

As the interval approached, Federico Macheda had a great chance to score against his former side after being put through one-on-one by Peter Whittingham, but Randolph stood firm and denied the Italian.

The introduction of Wes Thomas and Demarai Gray just after the break seemed to give the home side a new lease of life.

The two combined and thought they’d given Blues the lead, only to be denied by the linesman for offside.

Gray jinked his way past a few challenges and drill a cross across the face of goal for Thomas to tap home, but the striker made his run slightly too early and the score remained level. 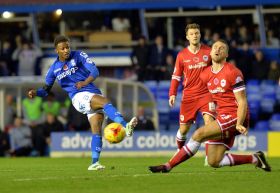 It was then Gray’s chance to go close, but his deflected long range shot trickled just past the post, leaving Cardiff goalkeeper David Marshall stranded.

With just under five minutes to go, Wes Thomas had a moment of madness which means he’ll miss the next three games after receiving his marching orders.

In a bid to get the game going again, Thomas went to get the ball from Cardiff centre-half Sean Morrison.

The pair came together and clashed before the striker raised his hand and left referee Kevin Friend with little option.

It means Thomas will miss trips to Rotherham and Blackpool as well as a home game against Nottingham Forest.

With the goalless draw both teams remain 23rd and 12th respectively.

In their next games Cardiff play Reading at home while Blues travel to Rotherham.

“I’m disappointed with the sending off. I haven’t seen the incident again so I’ll have to watch it before I make any judgement.

“Wes’s reaction suggested he was a bit disappointed to have let one or two people down with what happened.

“There was no real need for him to raise his hand and it meant four or five minutes of hanging on rather than trying to get the winner.”

“I think we should have drawn first blood in the match.

“We had two one-on-ones in the first half and should have taken one. In the second half it was a bit end-to-end with two offside goals which were actually offside.

“It’s a clean sheet away from home though and that’s important. It shows definite progress.”

Man of the match: Paul Robinson 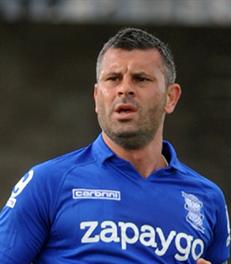 The Missing Men »
« Rowett vs Clark- A New Era