Rowett vs Clark- A New Era

Under the management of Lee Clark, my heart and soul was sucked out of the club and going to watch the team under perform every game became a chore. With Gary Rowett now in charge, I find myself falling in love again.

I really should stress that I am not one of Clark’s enemies. It was clear to me that his heart was in the right place and his passion was unquestionable after his emotional celebration against Bolton on the last day. That day is something that cannot be taken away from Clark, a day of celebration and a showing of grit and determination from the players. 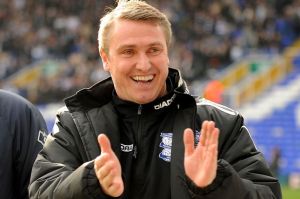 I still believe that last season’s job was a good one and by keeping the club battling in the Championship, I am grateful. With the financial constraints, the squad available to him and a number of his favoured players being loanees who returned to their parent clubs at different points in the season. I feel the job he did was at the very least acceptable.

This season however, Clark had to leave. Our inability to hold on to a lead was simply awful. Repeatedly taking the lead and then gifting the other team a share in the spoils or even all three points was sickening to watch. By the end of Clark’s reign, I dreaded taking the lead because I was so sure that we wouldn’t be able to hold on. For me, the additions made this season made the squad far stronger and we recruited very little loan players to depend on. This meant that Clark had a stable squad that he could build as a team and not have to change half the side come January. But by the closing days of October it was clear to see that he couldn’t get the best out of the players and by the 60th minute, all of the players were burnt out. It was time for a change.

Although it seems an impossible job, I wish Clark all the best with Blackpool and I’ll never forget that fateful day away at Bolton. A day where all Bluenoses rejoiced together and strangers held each other and screamed in one another’s faces as Caddis nodded home a 95th minute point to rescue the Blue side of the city. I’ll always hold that in my heart.

The first thing I noticed about Gary Rowett is his charisma. Blues fans fell in love with Rowett’s charm across social media. One of my close friends summed it up for me well. He told me that he could “listen to Rowett talk to him for hours”. Listening to Rowett’s interviews and press conferences are so refreshing. He’s a man who is clear in his vision, he knows what he wants and he’s clear about it. After games, Rowett always talks about what could be improved, rather than just telling us that the players tried their best and we were unlucky. Rowett pinpoints exactly what needs to be addressed and how he’s improving the squad one step at a time.

I’m also incredibly impressed by the football that Rowett is playing. I was expecting to play defensive football and I’m happy for him to do so against the teams that are likely to out play us. However, when the ball is at the back, there is no panic. Instead of knocking the ball long, or smashing the ball out of play, the back four hold the ball and attempt to play out of the back. By passing the ball in triangles, drawing attackers in, they create space for the midfield and allow the team to start an attack, rather than letting the opposition keep coming for more.

Confidence is a huge factor in football and to come in after an 8-0 hangover and get four points from two games is a fantastic start, especially considering before each of the games he’s been in charge, the opposing teams were top of the league. Rowett also appears to have restored Paul Caddis back to the player he was last season and has started brilliantly under Rowett. Clayton Donaldson and Andrew Shinnie both put in impressive performances against Watford, something that we hadn’t really seen at all under Clark. Players look more confident and composed with everything they do. With Rowett at the helm, I feel optimistic for the rest of the season but its important that we do not get carried away and admit this will still be a tough season.

You can read more on Ross’ work on his blog: http://footballthoughtspot.blogspot.co.uk/

2 thoughts on “Rowett vs Clark- A New Era”