Rowett, Hughton- Who are we Phelan?

With the new appointment of Birmingham City manager imminent, we are still unsure on who it will be. We are hearing lots of rumours from numerous sources. The Birmingham Mail and The Mirror have said that Burton Albion boss Gary Rowett is to be offered the job, whereas, as of Sunday, ‘TalkSport’ commentator Ian Abrahams (The Moose) has said that Chris Hughton is to return. In the past week we know that Gary Rowett and Mike Phelan (Sir Alex Ferguson’s assistant at Manchester United) have both been interviewed. However, Birmingham Mail have said that Rowett impressed in the interview and Panos Pavlakis has decided to offer him the job.

Personally, I am not in favour of Gary Rowett. Without any managerial experience outside of League 2, for me, he is not the right person for this job. 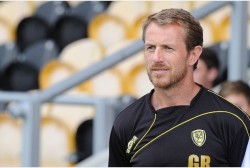 Although having a very impressive record at Burton, leading them to the League 2 Play Off Semi Final in the 2013/14 season and currently at second place this season, he could just be another Lee Clark. When Clark was appointed in 2012, he was hyped up as a young promising manager after leading Huddersfield to the play offs. I fear this is the same case for Rowett and in all due to respect, the job is too big for him.

The Championship is a massive step up from League 2 and to keep us up with nothing to work with is an extremely demanding task.

On the other hand, Bluenoses have been crying out for someone with passion and desire for the club, and as a former Blues player, I do not doubt that he can bring that. Rowett played 86 games for Blues from 1998-2000 scoring 6 goals. Maybe a return to the club is destined?…

He has been the favourite for the duration of our managerial vacancy and it looks likely that he is the man that will step in at 1/4 according to Sky Bet.

Out of the three possible candidates, I would prefer Phelan as our new manager, purely for the reason that I think we need someone that the players will look up to and want to play for.

According to ‘The Sack Race’, Phelan is at 8/1 to be appointed.

A once before Blues manager, Hughton looks to be the fans favourite for the job. Looking through Twitter, it seems that majority of Blues fans would like to see a return to St.Andrews for Hughton.

He has been distanced from the job according to betting companies until Sunday night when TalkSport commentator Ian Abrahams tweeted: “I am hearing Chris Hughton could be set to make a return to Birmingham City, lets see“.

In my opinion, Hughton is the wrong man for the job. When he was at Birmingham last, we had a good squad with the likes of Redmond, Mutch, Burke and Davies with some money and we were battling for promotion. Whereas now we have a squad with a lack of quality or desire who are at the opposite end of the table in the relegation zone. I question whether he has the capability of keeping us up with no money or resources.

At Norwich, he had a lot of money to work with and was trying to save the Canaries from relegation to the Championship. He was unable to prevent the drop and was sacked near the end of the season.

As of Sunday afternoon, Hughton was standing at 22/1 and since Sunday evening has has moved to 2/1.

One thought on “Rowett, Hughton- Who are we Phelan?”