An open letter to the owners of Birmingham City Football Club

To be honest I address you as “Sirs/Madams” because I don’t have a clue who any of you actually are. I’m aware we have a Chairman who is over here now, but he is just a front man. We don’t know who owns the football club, and we don’t know who is pulling the strings; personally I still find it hard to take that a man currently serving a Prison sentence in Hong Kong apparently still has a massive hold over the club. 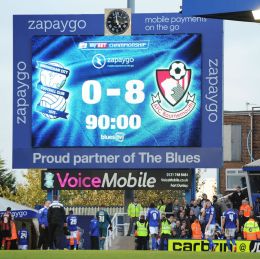 But I am asking you now, whoever is the person making the decisions and whoever are the people who are in control of when the club will be let go, please sell this club now. There are people waiting for the opportunity to come in and turn things around. This club is dying – Saturday was the worst day St. Andrew’s has ever seen, and that takes some doing. Your prolonged neglect of this club save whatever you could find to sell off as if we were a footballing market stall has seen it come to its knees.

My knowledge of finance and business malarkey is strictly limited. The only time I ever have anything to do with stock exchanges is when I choose to swap beef with chicken. From what I understand though, your reluctance to sell up is down to the fact that you want to keep your listing on the HK stock exchange, and we are the one thing that your holding company has who will ensure that you remain listed. To be honest I don’t give a hang why you are holding on to the club, but what I do know is how much damage your continued stewardship (or lack of) is doing to this club, and how bleak our future looks right now.

Also, it’s coming to a point now where if you hold onto this football club much longer you won’t have much of a club left to sell. This club, this once proud club, is a shambles. Yesterday was a culmination of years of mismanagement, this season is turning out to be even worse than last season when I didn’t think that was possible. All of it is your fault. Getting rid of Lee Clark isn’t going to remedy much; he may have been a symptom, but you are the cancer that is killing us.

So my message to you is to cut and run. Give this football club a chance. Blues fans have been remarkably patient, we haven’t caused many ructions against yourselves and we have been remarkably docile when it comes to any kind of rebellion or protest. But enough is enough, Blues fans have been subjected to one humiliation too many. Please, delay no more. Let go and give this club a chance, or we’re all going down.

One of many whose constant loyalty and support you have abused

Blues Collective Survey »
« Rowett, Hughton- Who are we Phelan?