Run of the Mills: Blues suffer another home defeat

Another loss, and another frustrating home game for Birmingham City as Bolton gave Neil Lennon a win on his first game in charge of the Trotters.

A lacklustre performance from Blues awarded Bolton their first away win of the season and this ‘new manager syndrome’ hit Blues again.

Bolton started brightest but didn’t have too many clear cut chances. Just after 10 minutes, Matt Mills brought down Demarai Gray just outside the box and was booked.

From the resulting free kick, David Cotterill clipped the bar with a swerving effort which wrong footed Bolton ‘keeper Lonergan.

Lee Clark was forced into an early sub as David Davis had to come off due to injury for Callum Reilly. 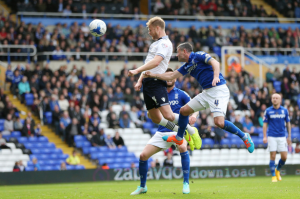 On 20 minutes, an out swinging corner was met by defender Matt Mills who headed the ball low in the net to give Bolton the lead.

A poor first half performance from Blues resulted in them going into the break 1-0 down as they failed to keep possession and trouble Lonergan’s goal.

The second half was more or less even, until around the hour mark where Blues started to dominate.

Blues went close mid-way through the second half when Donaldson’s header was met at the far post by Koby Arthur but he could only blast it over the bar from 6 yards out.

Demarai Gray had the best chance to equalise as he cut in from the left and saw his shot deflected and tipped onto the bar to make matters even more aggravating for the Blues faithful.

After a period of Blues’ dominance, Clark’s men were caught out on the break and just when it looked like Paul Caddis had the ball under control, he was out muscled by substitute Craig Davies who charged into the box, took it past Darren Randolph who synically brought down Davies.

The referee awarded a penalty and showed Randolph a straight red without hesitation.

Due to Blues having used all three subs, attacker Lee Novak had to step in goal and attempt to save a penalty. Craig Davies blasted the penalty into row Z to Blues fans delight.

Neil Lennon was sent to the stands in the build up to the penalty for entering the pitch and leaving his technical area.

After the sending off, Blues struggled to get back into the game and were out played. Bolton dominated and a late Jay Spearing shot was gobbled up by Novak.

As the whistle blew to a chorus of boo’s, we all must wonder where we go from here.

Birmingham manager Lee Clark: “I thought we were worth something today. We gave a really poor goal away from a set play, when so many games at every level are decided by set-pieces. I’m frustrated.”

New Bolton boss Neil Lennon: “I’ll appeal [being sent to the stands]. I’ve got to. I hope my reputation from my time in Scotland hasn’t preceded me. I haven’t been sent off for two years.

“My only misdemeanour today was leaving the technical area, showing enthusiasm. Officials need to cut people a bit of slack.”

Man of the match: Demarai Gray 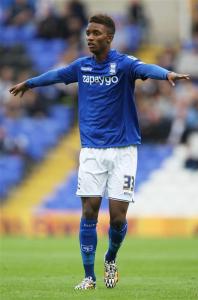 Managerless Blues go down to Marshall strike »
« Dire atmosphere at St. Andrew’s is contributing to our dire home form

One thought on “Run of the Mills: Blues suffer another home defeat”