These match reports are starting to sound like a broken record.

Yet again Birmingham City failed to see out a winning position after half-time; this time in a 2-1 defeat at home to managerless Fulham.

It’s now five of the last seven league games where Blues have dropped points from winning positions thanks to two goals from Tim Hoogland and Hugo Rodallega for the Cottagers in the space of ten minutes.

David Cotterill gave the home side a deserved lead just before the interval, but the visitors fought back strongly to earn their first league victory of the season.

The Welshman almost gave Lee Clark’s men a lead within minutes of the start, but after getting in behind the Fulham defence, the winger couldn’t find the target with a skewed effort on goal.

Fulham were looking to build on their Capital One Cup win in midweek over Doncaster and striker Hugo Rodallega’s audacious effort from an overhead kick on the edge of the six yard box flew well wide. 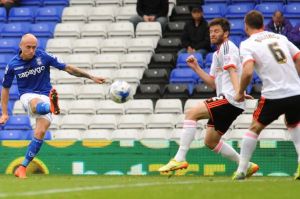 Blues continued to dominate and look dangerous throughout the half, but failed to take some guilt edge chances that fell their way.

After failing to find the net in the last five matches, Clayton Donaldson was unable to break his goal drought from Cotterill’s delivery as the unmarked striker glanced his header just the wrong side of the post.

With all the pressure they threw onto the Fulham goal, Birmingham did eventually take the lead, and it was well worth the wait.

Cotterill moved the ball out of his feet before beautifully curling the ball from 25 yards out into the top right corner, leaving Marcus Bettinelli with no chance in the Fulham goal.

But the goalkeeper did make a vital save in first-half stoppage time, denying Jonathon Grounds with a good save after the full-back went through one-on-one.

Unlike in reason matches though Birmingham’s good performance lasted longer than the interval, even if it was just for 15 more minutes.

The turning point seemed to come after substitute Brek Shea had his powerful shot was saved by Bettinelli on the hour mark. 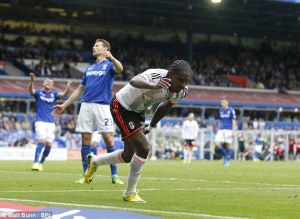 Fulham gained a new lease of life and an equaliser from Hoogland certainly helped matters.

A corner by the away side wasn’t properly dealt with and Nikolay Bodurov’s long range effort fell to former Blues’ loanee Dan Burn, who set up Hoogland for a chance at goal.

The former Schalke defender tried his luck and found the net, with a little help from a deflection off David Edgar, to swing the momentum their way in the match.

Birmingham never looked the same after the goal and things got worse as Rodallega gave the away side the lead ten minutes later.

Jonathon Spector was left red faced as the Colombian took advantage of his error to score his second goal of the season.

The Cottagers created a couple more chances through Ross McCormack and Rodallega, but the score remained 2-1 at the full time whistle.

Fulham caretaker-manager Kit Symons: “I have made it clear from day one – this is the job I’ve always wanted. But I also do know that the owner will take time to find the right person.

“I love the club and I’ve got a lot of history with Fulham and I want the right person to be in charge of Fulham. I want that right [person] to be me.”

Birmingham manager and former Fulham midfielder Lee Clark: “You could probably have taken a recording from two or three games this season. Dominant team first-half, only one up.

“And we buckled. The confidence drained out of us. We became completely the opposite kind of team to what we had been previously in terms of on the ball and off the ball.

“It is something we obviously have to eradicate.

Man of the match: David Cotterill 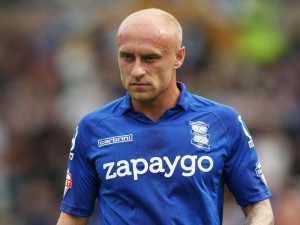