Birmingham City have crashed out of the Capital One Cup after a second round defeat to Sunderland at St. Andrews.

Three goals in the final 15 minutes of the match meant the Mackems head into the next round while Blues will have to focus on the league.

The scoreline did seem very harsh on the home side, but Sunderland’s added Premiership quality showed as they were both ruthless and clinical in front of goal. 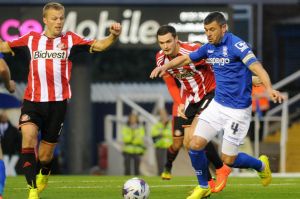 Although the visitors had more of the first half possession, Lee Clark’s side carved out the better chances.

A 25 yard strike from Paul Caddis almost gave the midfielder his second goal in as many matches, but Sunderland debutant Constel Pantilimon did well to tip it wide of the post.

Wes Thomas also went close as his effort went just wide after managing to make a run towards the front post to poke home Mark Duffy’s cross from close range.

Just before half time, David Cotterill had a great chance open the scoring after the ball fell kindly for the winger, but could only hit the outside of the post when he should have got his effort at least on target.

In similar fashion to Saturday, Blues couldn’t match their first half performance following the interval.

Sunderland started to have more of a purpose to their passing and made chances of their own.

With just under 15 minutes remaining, former Wigan midfielder Jordi Gomez made Blues pay for their wastefulness in front of goal an gave the Black Cats the lead.

The Spaniard moved the ball onto his favoured left foot and hit a well hit effort into the bottom right corner from 25 yards out.

Gus Poyet’s side increased not long after through Adam Johnson, who slotted away the rebound after Doyle’s save from Jozy Altidore.

A third just a minute later brought an end to any thoughts of a Birmingham comeback as Connor Wickham rounded off a good individual performance with a goal of his own.

The Mackems will face Stoke City in the next round and play QPR at the weekend while Blues travel to Wigan.

“I’m not speaking about the officials, I’d rather spend my hard-earned money on something else rather than a fine. I am going to go through the right channels, I will have some footage for them.

“It’s not a true reflection of the game. We played well, the scoreline does not do my players justice. After the first goal the players started chasing the equaliser and Premier League players will pick you off.

“We were more than a match for a very good team.”

“It was a strange game, it was a poor first half but somehow we got to half-time 0-0 but the second half was different.

“The same group of players got something at half-time and the first goal was key.

“It’s not going to be perfect all the time, after we scored it was the best we have played this season. We played rubbish for 45 minutes but we finished the game on a high. It’s the way the Cup goes.”

Man of the match: Connor Wickham