It’s been a long time coming, but Birmingham City have finally won at home after beating Brighton & Hove Albion at St. Andrews.

Wes Thomas’ only goal of the game ended the ten month wait for a home win and ensured Blues don’t go down in the history books for the longest run ever in English football history.

The winner came just after half-time and the win was well deserved as the home side dominated for the majority of the match, something that hasn’t been said at St. Andrews for some time.

Following a poor result in the season opener, Lee Clark made six changes to the side that played at Middlesbrough, including skipper Paul Robinson.

Blues started the brighter out of the two sides, but failed to create many chances in the final third against an experienced Brighton defence.

One of the six changes was David Cotterill and the winger wasn’t able to beat Seagulls’ goalkeeper David Stockdale with two fairly tame long range efforts after cutting inside from the left.

Right back Jonathan Spector went closer with a powerful shot from just inside the box, but Stockdale managed to collect the ball at the second attempt.

Despite having most of the possession, Sami Hyypia’s side didn’t manage to create a real clear cut chance in the first half, in a game where Darren Randolph had little to do throughout.

It was important with all their chances that Blues converted one before Brighton got into the game and just four minutes after the interval, Wes Thomas did just that.

The ball was played out to Cotterill on the right hand side before the Welshman put in a perfect delivery for Thomas to head home, leaving Stockdale with no chance.

Straight from the restart the away side came close to equalising through Chris O’Grady, but a fine interception from Spector denied the striker his first goal for the club.

Brighton again had efforts on goal from free kicks by Jake Forster-Caskey and Kazenga LuaLua which Randolph comfortably tipped over the bar.

Cotterill had a chance to get himself on the scoresheet late on as his free kick fizzed just past the left hand post.

Blues held strong at the end and convincingly picked up the three points to finally get the home hoodoo off their back.

Lee Clark’s men will be hoping to take momentum into their game at home to Ipswich Town on Tuesday night while Brighton travel up to Leeds United.

“I always stressed that we had a new group of players and I didn’t think it was an issue (poor home form) I had to address.

“I’ve never spoken about it in pre-season as this is a completely new squad. I think we have seen the difference we have played.

“You have to have right players. The work ethic is brilliant. They press from the front and to win this game was brilliant for them.”

“We cannot take a lot of positives out of the game. I didn’t like it. I know that we are a better side on the ball than we showed today. We couldn’t get our game going.

“When you cannot score it is important to keep a clean sheet but it wasn’t to be against Birmingham. I am not happy where we are at the present time after defeats against Sheffield Wednesday and Birmingham.”

Man of the match: Jonathan Spector 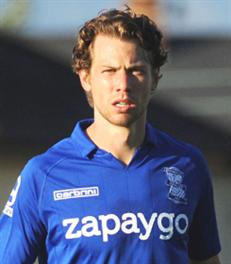 The Ex-Files: Guirane N’Daw »
« The Tilton Talk Show is back!