Season ticket prices: Reaction and comparison to other clubs

Birmingham City have announced their season ticket prices and the news is of reductions around the ground.

Existing season ticket holders who buy their season ticket before the June 28 deadline will receive up to a £50 drop in price compared to renewing after the ‘early bird’ cut off.

The biggest drop in price, however, is in the West Paddock of the Main Stand where the standard price is down £152 on last years. 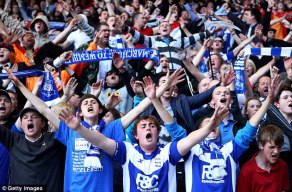 In the majority of other areas, prices for adults, students/ seniors and 13-18 years olds have also gone down compared to the standard at the start of last season.

The season ticket deals also come with added bonuses such as a discount on the replica shirt and membership on the away travel priority scheme, but the question remains, how many Bluenoses will actually renew/ become a new season ticket holder?

Last season was record breaking at St. Andrews for all the wrong reasons. Two home win in 23 matches, the fewest home wins in a season by Blues, and conceding almost two goals per game; hardly the stats to put bum on seats.

When clubs like Wigan can charge very little £375 for their most expensive standard season ticket (£16.30 per match) sitting towards the top of the table and playing attractive football, how can the club expect to see £552 (£24 per match) as value for money?

But the main issue as to whether supports will be going regularly to home matches next season is the ownership, with many fans saying “I won’t be renewing until we see a change of ownership”.

With the news over the past few days of a British consortium headed by Jeremy Wray and funded by a North American investment fund announced as the preferred bidder (a coincidence this has happened just before the prices were revealed?) the chance of a takeover could be closer than originally thought.

As Blues were the final Championship club to announce their season ticket prices for next season, below is a list of each club’s most expensive (non-executive or club class) and cheapest (non-family stand) adult season ticket.

With each club at a different stage of the process, I have used the price it would cost a supporter to buy one a day before the season starts.

What are your thoughts on the prices?

Are season tickets value for money in general?

Will you be renewing?

2 thoughts on “Season ticket prices: Reaction and comparison to other clubs”