Birmingham City slip into the relegation zone for the first time since early November following a seventh home game without a win against Leeds United.

Three second half goals in the space of twenty minutes sealed the victory for Leeds as Blues failed to improve their poor defensive record after conceding 27 goals in ten games at St. Andrews.

Substitute Federico Macheda scored a late consolation, but it wasn’t enough to stop Lee Clark’s side from losing their fourth game in a row.

Despite a dejected mood around the stadium in recent home games, the Bluenose faithful rallied on their side throughout the first half with a vocal backing that has been missing for the majority of the season.

They almost had early had a special goal to cheer about early on as Lee Novak, who was returning from injury, fired a spectacular volley just wide a few minutes into the game. 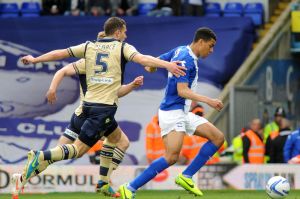 Another midfielder coming back into the side was Tom Adeyemi who had a great opportunity to give the Blues an early lead.

The former Norwich man burst through the Leeds’ defence to reach Novak’s ball over the top, but Adeyemi failed to keep his shot down and sailed just over the crossbar.

Blues continued to dominant the play and the likes of Nikola Zigic and Callum Reilly were thriving in the tough tackles with the Leeds’ midfield.

The Championship top scorer, Ross McCormack wasn’t far from creating a goal against the run off play for the away side and Darren Randolph did well to save Michael Tonge’s effort at his near post.

Half time appeared to come at the wrong time for the home side as the impressive performance they’d shown in the first half failed to appear after the interval.

Just before the hour mark, Leeds made Lee Clark’s side pay for not taking their chances through striker Matt Smith.

Full back Danny Pugh swung in an excellent delivery to the back post before Smith rose the highest to head home his third goal against Blues this season after tormenting their defence in the reverse fixture.

It took just two minutes for Pugh to get himself on the score sheet to double Leeds’ lead by calmly slotting into the bottom corner after making a good run into the box.

More misery followed as Paul Caddis attempted to clear McCormack’s cross but scored an own goal as Blues’ woes went from bad to worse. 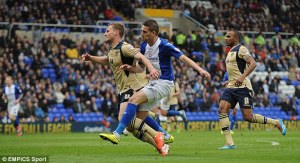 The introduction of Macheda seemed to give Birmingham more going forward as Zigic had someone looking to pick up on any chance that came his way and the Italian did so with seven minutes to go.

A great ball across the box from Scott Allan, who hadn’t played in the first team since August, found Macheda before the striker took the ball onto his left foot and smashed his effort past the near post.

With most of the results going against them, Birmingham now sit in the relegation zone and one point from safety.

Two big games will now decide their fate against Bolton Wanderers at the Reebok Stadium on the final day and Tuesdays game in hand over the other sides at home to Wigan Athletic.

“It is hurting me and my family. It is affecting the enjoyment of living in a fantastic part of the world. It is not great, so I am prepared to do everything to keep us in the league. I know that I can do it.

“I believe that I have the backing of the players. A bit of nervous tension has crept in and we need to find a way of eradicating this in the last two games.

“Our poor home form is reality. I cannot affect the past but I can the future so why not go out with bang in our last home game against Wigan by winning?

“That would set us up for the last match of the season to give us an opportunity to stay in the league. We were energetic and powerful in the first half but to give away goals like we did you get punished.”

Leeds United boss Brian McDermott on rumours that he is about to lose his job:

“These sort of things do not frustrate me or unsettle me. The most important thing is Leeds United and what is best for this football club and what is best to take this club forward. That is the only agenda I’ve got.

“The future is looking brighter as we have won three of our last four games. We were top five at one stage but we had a lot of things going on with the ownership, which was really difficult.

“These are mitigating circumstances and not excuses. We are now as safe as houses in this league and looking to do well next season.”

Man of the match: Nikola Zigic 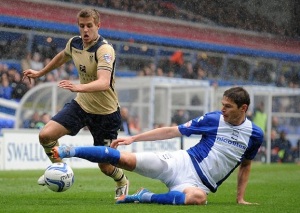 A Reebok rescue mission after defeat to Wigan »
« I’ve backed Lee Clark, but I cannot defend the indefensible

4 thoughts on “Blues plunge into bottom three with Leeds defeat”