Delight for Derbyshire adds pressure on the Blues

The defeat for Lee Clark’s side heaps more pressure on the Blues as they edge closer to the relegation zone while Derbyshire’s winner gives Forest an outside chance of a play off push.

Despite not losing at the City Ground since 1999, Birmingham couldn’t have got off to a worse start in defending that record.

A mistake by Jonathan Spector within the opening three minutes gave Jamie Paterson a chance to put Derbyshire through on goal. 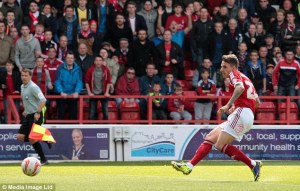 The striker managed to beat the offside trap before calmly slotting home past Blues’ goalkeeper Darren Randolph to score his second goal in as many games after going ten league matches without a goal.

It was a goal that was tough to take, not only because it was a former Blues’ player, but, in a game where the away side needed to get on the front foot early against a side low on confidence, they conceded at the first opportunity.

Birmingham failed to create much in response to the early goal, especially with no one supporting Nikola Zigic when the ball was played up to the Serbian.

Just before half time Forest’s lead was almost doubled through Ben Osborn, who headed wide from Derbyshire’s cross.

In similar fashion to the opening goal, Paterson almost scored after beating the offside trap early in the second half, but Randolph did well to save his effort from the edge of the box.

The away side slowly grew into the game and Chris Burke started to have an influence on proceedings.

A cross from the right by Tom Thorpe after a good run by the Scot could only be headed straight at Forest ‘keeper Karl Darlow from Zigic.

Just minutes later the winger was close to creating an equaliser again, but Peter Lovenkrands’ air shot at the near post pretty much summed up the day for everyone involved with Birmingham City.

Victory for the home side sees them move three points behind sixth placed Brighton, whereas Blues slip to just one point above the relegation zone.

With three home games in eight days, the side know they must improve their home form if they want to keep their heads above water.

Nottingham Forest caretaker boss Gary Brazil: “I said weeks ago that it might not take a massive number of points to get you into sixth place and it is proving to be the case.

“If we can get a win at Elland Road, the last two games are going to be very interesting.

“I am really pleased for everyone at the club because this has been a tough period. To get ourselves a win now gives us some momentum, but we have to carry that on now, on Monday afternoon.”

Birmingham manager Lee Clark: “We have to dust ourselves down following this, because we have some huge games coming up.

“We have to go again. We need our senior players to step up to the plate.

“It is in our own hands and we have to look after ourselves. We have to produce the goods. We grasped things better in the second half, but we need to do it for entire games.”

Man of the match: Emyr Huws