Birmingham City secured their ninth league win on road this season after beating Doncaster with an inspired second half performance.

A brace from former Rovers’ loanee, Federico Macheda, and  one from Lee Novak in between helped Birmingham move away from the bottom three.

After deservedly going behind through Paul Quinn’s header just before halftime, the away side responded superbly by dominating the second 45 minutes.

Each goal saw the goalscorer taking advantage of mistakes in the Doncaster defence and ended their seven match unbeaten run at the Keepmoat.

The opening stages were played in the midfield with Paul Keegan and Dean Furman given plenty of time to dictate the game for Paul Dickov’s men, failing to create any opportunities.

David Cotterill brought the match to life, narrowly missing the target from long range, and striker Chris Brown starting to cause problems in the air before Quinn scored with the interval approaching.

A cross to the far post was poorly dealt with and the central defender fired home from ten yards out to make the away side pay for their sloppiness.

Novak hit an effort just wide, but Birmingham never looked like scoring until a substitution at half time swung the game in their favour.

Although he didn’t change the game himself, Nikola Zigic’s introduction for Jordan Ibe brought a spark of life out of Macheda, who looked less isolated and more energetic with a man alone side him.

Almost a quarter of an hour into a Blues dominated second half, the Italian equalised, scoring a goal epitomising his new lease of life. 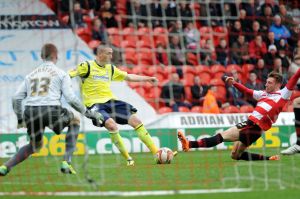 A hesitant James Husband looked nervy on the ball inside his own box, allowing Macheda to tackle him and cooly place his effort into the bottom corner.

Two goals in the space of six minutes then gave Birmingham the vital win they required with Millwall and Yeovil both picking up three points.

The second goal was the perfect example of one of the unwritten rules in football, “don’t let the ball bounce”.

Lee Novak chased down Darren Randolph’s long ball up field and, after James Coppinger didn’t clear it, the striker beat the on rushing Sam Johnstone to give the Bluenoses the lead.

Their lead was doubled as Macheda scored his second to give Lee Clark’s men a bit of breathing space towards the final ten minutes.

The striker was in the right at the right time as the Manchester United loanee headed in Tom Thorpe’s header back into the box from Paul Robinson’s free kick.

Rovers responded and it took two fantastic saves from Randolph to keep out efforts from Billy Sharp and Theo Robinson.

The victory for Lee Clark’s side brings the Blues level on 43 points with Doncaster, seven points clear of the relegation zone.

“It was definitely a self-inflicted defeat. We were one up at half-time and should have been further in front.

“But if you make mistakes you get punished. All three goals were individual errors that cost us dearly and we have to learn from that.”

“It wasn’t looking good in the first half but the players came out after the interval and put in a very good performance.

“We made changes and just matched them up in the second half, won our individual battles and played on the front foot.

“We scored three and could have had more. Now we just have to get it right at home.”

Man of the match: Tom Thorpe

Will Lee Clark be Blues manager at the start of next season? »
« Grabban brace extends Birmingham’s awful home run