*Sorry for the delay*

A late equaliser from new loan signing Federico Macheda secured Birmingham City’s first point for a month in a 3-3 draw against Derby County at St. Andrews.

Despite being 3-1 down with 15 minutes to go, substitutes Chris Burke and Macheda fired home to maintain the Blues record of not losing to the Rams at home since 1995.

The game started slowly with the only thing of note was the protest banners/ chanting against the ownership and an injury to Tom Thorpe on his debut.

Derby then got into gear creating several chances before Tyler Blacklett brought down Will Hughes in the box for referee Craig Pawson to award a penalty.

Craig Bryson stepped up, but his penalty was brilliantly saved by Darren Randolph, who palmed the ball away from danger after diving low to his right.

It was a difficult half for Blues, who found it difficult to gel with the new signing and adapt to the diamond formation they used in the match.

The second half was almost like a different match as it only took three minutes for Brian Howard to score in a goal packed 45 minutes.

Paul Caddis crossed well to the front post and the midfielder flicked the ball on then watched it trickle into the opposite corner for his first goal for Birmingham.

The celebrations were cut however as within a minute Derby equalised through unmarked Patrick Bamford at the far post.

Just ten minutes later, Derby took the lead as Chris Martin’s shot deflected off Bryson’s net and could only be parried into the top corner by Randolph.

A third soon followed as a great run from the left meant Craig Forsyth could take advantage of Birmingham’s poor defending.

But the home side fought back with two goals from two of their substitutes.

The first and their second in the game came from winger Chris Burke who cut it and hit a left footed effort into the bottom corner.

In the dying embers of the match, Federico Macheda found a dramatic equaliser as the ball fell kindly for the striker in the six yard box and the Italian fired home.

With Charlton away next Saturday, this late come back could give Blues the confidence needed to pick up points in a crucial match.

“The desire and never-say-die attitude was there for everyone to see. We could have buckled at 3-1 down against quality opposition but we kept going and got a terrific ending to the game.

“The lack of experience is scary at times but they’re taking it in their stride and showing a mental courage to keep fighting and fighting.

“Federico didn’t meet his team-mates until 12.30pm today so that’s probably why he started on the bench. But he made a huge contribution and looked bright.”

“We should have won it easily and instead we ended up drawing, so that’s a disappointment. It’s a harsh lesson for our team.

“The second goal we conceded was an absolute disgrace. It was a terrible goal.

“It’s cost us, we’ve missed a great opportunity in a game we should have won but that’s football.”

Man of the match: Emyr Huws 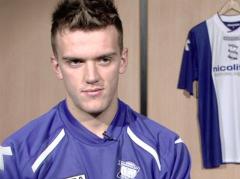