It has been a busy day for Lee Clark and his staff as three players have joined Blues on the final day of the transfer window, while two players have headed out on loan.

Manchester United trio Federico Macheda, Tom Thorpe and Tyler Blackett have joined Birmingham City on loan until the end of the season.

The first signing of the day was left back Tyler Blackett who was on loan at Blackpool earlier this season and even played against the Blues at St. Andrews in November.

Centre half Tom Thorpe was the second to join for his first experience away from Old Trafford.

Thorpe, 21 is the captain of United’s development side and captained the club’s U18 team that won the FA Youth Cup in 2011. 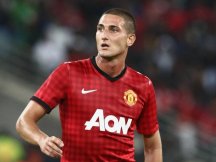 Clark’s third signing of the day was the Federico Macheda, who is well known for scoring the winning goal for his parent club on his debut against Aston Villa in 2009.

The Italian striker has been on four loan spells before joining Blues, including a loan to Doncaster earlier this season.

All three players are available for Saturday’s match against Derby County.

The two players leaving St. Andrews on the final day of the transfer deadline day are Hayden Mullins and Charlee Adams.

Veteran utility player Mullins has joined Notts County on loan until the end of the season after only making six league appearances this season.

Mullins is now the third experienced squad player to leave during January after the departures of Wade Elliott and Darren Ambrose on loan deals.

Charlee Adams has also left on loan until the end of the season to Conference Premier side Lincoln City.

The midfielder/ defender has join the Imps to gain experience of first team football after making his Blues’ debut against Bristol Rovers recently.

How do you feel Birmingham City have done in the transfer window?

One thought on “Busy Transfer Deadline Day for Birmingham City”