Leicester City have made it eight wins in a row for the first time in their history with a 2-1 victory at St. Andrews.

Goals either side of half time from Lloyd Dyer and Jamie Vardy secured the victory for the away side, while Birmingham City recorded their ninth home league game without a win.

With Mitch Hancox failing a late fitness test, Amari’i Bell made his debut in a very young Blues side without their suspended captain Paul Robinson.

The lead leaders dominated the first half with 12 chances compared to Birmingham’s one shot on goal.

Matty James almost scored early on, but Darren Randolph made a good save to deny the midfielder.

Leicester then took the lead half way through the opening 45 minutes.

David Nugent counted attack down the left and passed across before passing across goal to Dyer to fire home the away sides 50th goal of the league season.

The pressure kept coming from Leicester and Randolph was forced to pull out another good save, but this time from Anthony Knockaert, as the home support became more frustrated with their team’s lack of opportunities before the half time whistle blew.

After the interval, Peter Lovenkrands came on for Olly Lee to change to 4-4-2.

Although the change in personnel didn’t change things, having an additional striker added more impetus into the blues’ side and made them more willing to push for an equaliser.

Bell and Albert Rusnak started to combine well down the left wing while Paul Caddis and Chris Burke looked as threatening down the right wing as ever.

Rusnak almost created the equaliser for Lee Clark’s side as the winger’s pacy free kick was almost headed by Kyle Bartley into the bottom right corner.

With Birmingham looking more likely to grab the second goal, Leicester dealt a blow to their chances as Vardy doubled his sides lead.

New signing Riyad Mahez picked up the ball in his own half and played a superb ball through to Vardy into the final third.

The in form striker turned Bell one way then the other before hitting his shot into the bottom corner to score his third goal in four games. 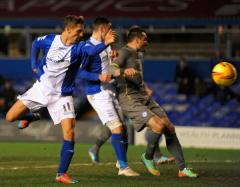 It seemed the game was gone, but just into stoppage time Lovenkrands headed home to give the home side a slight chance of a come back.

Chris Burke whipped in an inviting cross from the right for the Danish striker to score his first league goal since March.

With victory, the Foxes maintain their lead of eight points at the top of the table, while Blues stay 17th and five points clear of the relegation zone.

“We were aware about the record but the players never discussed it. It was an added plus that we were able to achieve this record. To win eight games on the trot is very difficult in any league, particularly the Championship.

“The players have to take a great deal of credit with their ability to win different types of games. In this league you have to scrap and be resilient. I think against Birmingham we showed that we are capable of playing some really good football.

“The players are very focussed on the goals we have set and that is to win promotion. The chemistry within the squad is good and we are better equipped to deal with disappointment.”

“The scoreline doesn’t tell the whole story. In every aspect of the game Leicester’s confidence was sky high.

“We were happy at the end of the first half that it was only 1-0. We had a go in the second half but they were always the dominant side.

“The league table doesn’t lie. Eight wins on the bounce at any level is a fantastic achievement. They have quality all over their team and Nigel Pearson has assembled a very good team. I hope that they go on and get promoted.”

Birmingham man of the match: Will Packwood 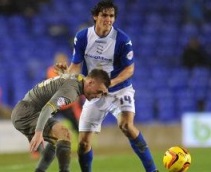 One thought on “Blues Outfoxed Again at St. Andrews”