Mellis the Menace grabs a point for the Tykes

Another home game and another draw for Birmingham City as Jacob Mellis’ second half free kick grabbed a deserved draw for Barnsley at St. Andrews.

Nikola Zigic gave Lee Clark’s side an early lead, but the visitors came back strong to record just their sixth away point of the season.

Blues made a good start to the game and it took only ten minutes to make their early dominance count.

A deflected cross from the left by Callum Reilly, who was recalled to the side following Tom Adeyemi’s injury, rolled across the six yard box with Zigic sliding in to give the home side a lead.

It was the Serbian’s first goal at St. Andrews for almost a year and was was important as it settled the nerves of most of the bluenoses present.

The lead was almost doubled when Dan Burn’s header from Olly Lee’s corner looped onto the crossbar, but it many ways this seemed to be a turning point in the match.

Barnsley started to grow into the game whereas Birmingham were struggling to string a couple of passes together.

New loan signing Brek Shea went close for the away side with a close driven effort from 20 yards that was well saved by Darren Randolph.

Another shot from the American after the half hour mark was too hot to handle for the Irish goalkeeper and the ball fell kindly for Mellis.

The attacking midfielder had a great chance to equalise from close range, but dragged his effort wide of a relieved Randolph’s goal.

Just as half time approached, Burke had a good opportunity to grab a second as he raced through on goal with just Luke Steele to beat, but his shot was well saved by the outrushing goalkeeper.

After the break, the Tykes continued to press and it took a clearance off the line from Zigic to prevent Peter Ramage scoring against his former side.

Mellis, who started his career at Chelsea, scored a free kick that former team mate Frank Lampard would have been proud of as the ball sailed over the wall and into the net from 25 yards, leaving Randolph with no chance.

The manner in which the away side scored may have surprised some, but no one could argue that it wasn’t deserved for the way they’d play and controlled the majority of the match.

In response, Clark brought on Peter Lovenkrands and Wade Elliott to give Blues more of a threat going forward, but even with the crowd spurring them on to steal the three points they couldn’t find a winner.

With seconds remaining, Lovenkrands crossed for Zigic at the near post, but the striker couldn’t direct his header on target as the whistle blew, meaning Blues had to settle for their fifth home draw in a row.

“We feel we have dropped two points. It is frustrating but we should have won the game, it is an example to my young players to do the right things.

“Unfortunately there appears to be a common theme in the home games, we start so well and go ahead but then have a nervy spell. The opposition then get a goal and then we kick on again – it seems as if have to get angry before we put the opposition under pressure.

“I was frustrated for the players because over the festive period they have given me everything. I was in bit of a dilemma at half-time, I had three players physically sick and they were running on empty in the second half.”

“Obviously I am encouraged by this performance. We haven’t gained many points away from home and to get a result that not many people expected is a fine performance.

“After going behind to an early goal people might have expected the floodgates to open but we turned it around.

“There was nothing between the two teams but there are plenty of points to play for and if we can repeat the kind of performance we showed against Birmingham we will close the gap between the teams above us.”

Man of the match: Olly Lee 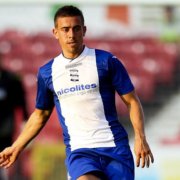 Ambrose Out, Howard In »
« A Half Season Report