Lingard sees red in a stalemate at Wigan

Jesse Lingard received the first red card of his professional career as Birmingham City picked up a point in a 0-0 against Wigan Athletic.

The midfielder was dismissed for a foul on Jordi Gomez, but the away side held onto a point to take their unbeaten run to eight games.

Lee Clark’s men were looking for a fourth straight away win at the DW Stadium and his side almost took the lead early on through Lee Novak.

Paul Caddis played a teasing ball to the near post from the right, but Novak, recalled to the starting eleven for the first time since his injury, couldn’t quite get enough contact to break the deadlock.

This was Blues’ only real chance in the half as they struggled to play a god final ball with Chris Burke and Jesse Lingard marked well out of the game by Jean Beausejour and James Perch respectively.

Just as half time was approaching, Callum McManaman tested Darren Randolph for the first time in the Birmingham net with a driven effort from 25 yards.

McManaman, who was man of the match in last season’s FA Cup Final, pounced on a slip from Dan Burn to break into space on the edge of the area, but Randolph was equal to the effort, diverting the shot round the post for a corner.

The more the game went on, it appeared Blues were looking to sit back and counter as the constant threat out wide from McManaman, Beausejour and James McClean was becoming more frequent.

This became more apparent when Lingard was shown a straight red card for a late tackle on Latics’ substitute Gomez on the hour mark.

After being on the receiving end of a similar tackle himself, the youngster on loan from Manchester United let frustration get the better of him making a poor tackle before getting involved in a scuffle with Perch and then given his marching orders by referee Steve Martin.

Wigan started to pile on the pressure with Blues down to ten men and a last ditch tackle interception from Dan Burn denied McManaman from close range following Beausejour’s low cross to the near post.

But the defense held strong for the final ten minutes to add another game to the   unbeaten run and maintain their good record in the first fixture after Christmas with only one defeat in eleven.

With others winning around them, Blues drop to 18th in the league, seven clear of the relegation zone, while Wigan sit in 13th with a game in hand.

“I was certainly not disappointed with a point. Sometimes you have to accept that you don’t have enough on the day to win.

“There was only one winner in the first half. Wigan never gave us any issues at all.

“Even when we went down to 10 men, our goalkeeper’s not had to make many saves. With 11 against 11, we were certainly the dominant team.”

Man of the match: Paul Robinson 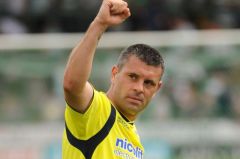 Ewood ecstacy as Blues make it nine unbeaten »
« A winter break in England?