*Apologises for the delay, we’ve had an issue with the site*

Unlikely goal scoring hero Paul Caddis scored a brace to guide Birmingham City to a 3-0 victory over Barnsley at Oakwell.

The right back’s double and a third from Nikola Zigic saw Blues pick up their third successive win in the Yorkshire town and move six points clear of the relegation zone.

It was the latter who had a great chance to open the scoring within the first five minutes as the Serbian striker had an effort on goal blocked after Callum Reilly chose to pass, despite being in a good shooting range. 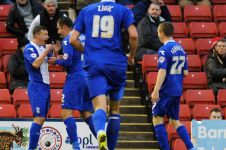 The travelling Bluenoses didn’t have long to wait before celebrating the opening goal, but they weren’t expecting it to have been scored by Caddis.

After Barnsley centre back Jean-Yves M’voto made a poor pass which fell to Caddis, the right back wriggled his way through a couple of challenges in the centre of the midfield.

The former Scotland U21 international then hit a low fizzing effort right into the bottom corner to score his first goal for the club, leaving Jack Butland with no chance.

There’s a saying about buses. “You wait ages for one and then they all turn up at once.” 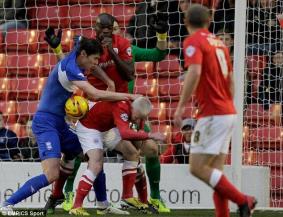 This was definitely the case for Caddis who, in his 37th game for the club, stepped up to take a penalty after Zigic was pulled down by M’voto, who had more than a handful of the striker’s shirt.

It seemed a clear penalty with Zigic’s shirt almost coming off his back, but his theatrical dive made the Barnsley players convinced it shouldn’t have been given.

However, referee Kevin Wright pointed to the spot and Caddis stepped up and sent Butland the wrong way with the away side now fully in the driving seat.

It was clear the home fans weren’t happy with their side with many fans voicing their frustrations, especially with it being a day dedicated to former Barnsley player and manager, Norman Rimmington.

A third soon followed thanks to Zigic’s second goal in three following a mistake from Jim O’Brien.

The Irish midfielder failed to clear his lines as the last player back and Nikola Zigic collected the ball before delicatly  chipping the ball into the roof of the net for his third of the season.

Barnsley could have snatch a late first half goal through Marcus Pedersen, but the Danish striker didn’t get a clean enough contact to pull a goal back.

With Paul Caddis playing superbly in defence as well as attack, Barnsley were forced to move Paddy McCourt into a central position after the half time break.

The home side still struggled to create chances, however, as Blues’ defence held strong in an attempt to secure their third clean sheet of the season.

Despite holding strong at the back, Lee Clark’s side were still creating chances as Manchester United loanee Jesse Lingard almost scored his first away goal for Birmingham with a blocked effort and shot over the bar in quick succession.

With less than five minutes remaining, Lee Novak had a great chance to get his name on the scoresheet, but his near pst shot was well saved by former Birmingham goalkeeper Jack Butland.

But the final whistle ended a miserable day for Barnsley as they sacked David Flitcroft later that night while Blues moved to 18th with the three points.

With two crucial home games coming up against Doncaster Rovers and Middlesborough, this could be the start of a very good week for Lee Clark and his side.

“In terms of forward play we were exceptional in the first-half. We scored three, could have scored more.

We were a real threat, the front four, they played with a lot of enthusiasm, vigour and quality.

“The second-half, you know, you have got to do it right, be professional.

“They went gung-ho and had three of four players with attacking threats who could cause you problems.

“But we defended really well as a team and I’m really pleased with a clean sheet and scoring three goals away from home to win the game.”

Man of the match: Paul Caddis 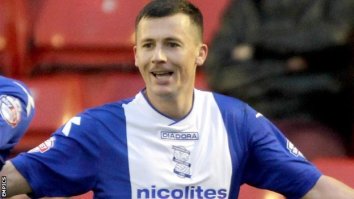