Burn and Randolph left red- faced by the Trotters

Blues looked a different team to the side that has previously won their last three home games, but their apprehension and carelessness on the ball resulted in the opening goal of the game through Dan Burn’s mistake after just 12 minutes.

Jermaine Beckford pounced on the young central defender’s hesitation on the ball before racing through on goal and coolly slotting home for the Jamaican’s first league goal in a Bolton shirt since his move from Leicester City in the summer. 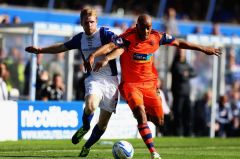 Lee Clark’s side looked to get Chris Burke on the ball as much as possible following the goal, but the winger was well managed by the Bolton defence.

The Scot’s only contribution to the first half, however, almost created an equaliser just before half time.

Burke made a trademark run inside from the right hand touchline, passed to Callum Reilly on the edge of the box, who forced a stunning save from Adam Bogdan in the away side’s goal, with the ball looking destined to find the bottom corner.

Despite Nikola Zigic and Lee Novak coming on early in the second half for Birmingham to add a more direct approach to their attacking play, it was Bolton who looked more likely to score the second goal of the match.

Beckford almost doubled his tally for the game after Liam Feeney delivered a superb ball into the box and the unmarked striker saw his header canon off the crossbar from just six yards out.

Bolton almost guaranteed victory when it was Darren Randolph’s turn to make an uncharacteristic error just past the hour mark.

The Irish goalkeeper failed to hold onto a cross from Feeney and former Blues’ midfielder Neil Danns capitalised to help Wanderers on their way to a morale boosting win.

Within minutes of the second goal, Nikola Zigic gave the Midlands’ side a lifeline in just the Serbian’s third substitute appearance of the season following a back injury.

An unmarked Zigic headed Burke’s deep cross back across goal, but Bogdan couldn’t keep out the big striker’s first goal at St. Andrews since January.

With just minutes remaining and heavy pressure being put on the Bolton goal, referee David Coote waved away a penalty appeal from the home side after the ball appeared to hit the arm of Medo in an unnatural position very late on.

Despite the three wins in four previously, Lee Clark will now have some thinking to do over the international break to keep their heads above water before the side next play at Leeds United in a fortnight.

“It’s not a relief because I strongly believe that if you work hard and you study the game, you get your rewards and that’s what we’ve certainly done here.

“I’ve tried to stay calm. I’ve had good support from the chairman in a difficult moment, but we’ve certainly not been far away having registered five draws.

“You have to go through some bad moments to get your reward and that’s what we’ve done.”

“They’re just individual errors from two lads who have been brilliant for us all season.

“They’re human beings, we all make mistakes. Unfortunately for the two lads, their errors have cost us goals.

“There’s no finger-pointing at them. Our general first-half performance, in terms of not being the driving force we have been in our previous three home games, was the catalyst for the result.”

Man of the match: Jermaine Beckford

The Good, the Bad and the Packwood »
« Murphy the Lions Tamer