Blues bow down to Royals at the Madejski

Danny Guthrie’s set-pieces were the the difference between the two teams as Blues conceded two free-kicks at the Madejski Stadium on Saturday. Jesse Lingard returned to the team after missing Wednesday night’s victory over Swansea but the Manchester United loanee made little impact in this distinctly average performance.

The first chance of the match fell early on to Reading’s Pavel Pogrebynak. Gareth McLeary’s ball found the Russian striker, but Darren Randolph spread his body and excellently palmed away Pogrebynak’s effort.

At the other end, Chris Burke smashed a shot towards goal that was saved by Alex McCarthy. Burke collected the ball once more and looked set to test the opposition ‘keeper again, but his trademark left-footed curling effort was blocked by defender Alex Pearce.

But the home side were looking threatening. Dan Burn was nearly left red-faced after Randolph palmed the ball out, only for it to hit Burn and narrowly go wide. From the resulting corner Reading should have been ahead. Guthrie’s delivery was met by Chris Baird who powerfully headed over from close range.

Again the Royals were close to going ahead. Hal Robson-Kanu attempted to divert a cross home but despite a mix up between Randolph and Burn, the Irish goalkeeper gathered safely.

After 30 minutes, Reading did take the lead. Guthrie’s free-kick evaded everyone and Randolph, distracted by Adam Le Fondre’s attempts to get his head to it, watched the ball nestle into the far corner of his net. 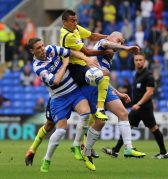 Tom Adeyemi hit a powerful long-range effort that was dealt with well by McCarthy and Blues went in behind at the break.

Birmingham started brightly after the break but David Murphy’s cross was smashed over by Burke into the 1130-strong away contingent.

Moments later Reading nearly doubled their lead. Gareth McCleary’s collected the ball from a blocked free-kick but his low shot was denied by Randolph who scampered across his goal line to divert the former Nottingham Forest winger’s effort around the post.

Nikola Zigic was brought on in the 68th minute and his return to action almost started with a goal. David Murphy’s cross was met by the Serb but his header flew over.

But in the 75th minute Reading doubled their lead. Robson-Kanu was brought down 20 yards out and Guthrie’s dead-ball accuracy punished Blues again. This time there was no mistaking Guthrie’s intentions; his right-footed strike beating the wall and curling out of the reach of Randolph.

Wade Elliott’s long-range thumper almost provided Birmingham with a way back into the game but 23-year-old McCarthy again parried the ball clear, ensuring his clean sheet and Reading’s victory.

All in all, a decent performance by Blues but the lack of quality in the final third was evident. Ironically, after scoring 7 in our last 2 matches we had hoped that problem was solved. Having said that, Reading were always going to provide tough opposition and it’s important that our expectations do not sky-rocket after two wins.

We find ourselves in 19th place and in-form Millwall are up next at St Andrew’s on Tuesday.

“The difference between the two teams was two quality set plays. We knew before the game because I came to watch Reading last week and the one thing I was stressing to the players was to not give away cheap fouls  to give Guthrie the opportunity to deliver the quality he has on the ball.

There was no difference between the two teams in the quality of passing and the amount of chances that we created and we, in terms of the second-half, probably had the lion’s share of the play but without possessing that quality in the final third to get a goal we’re not going to get back in the game.”

“We could really have been out of sight in the first half with all our chances. We’re just starting to build a bit of momentum now with another three points and another clean sheet.

“Every game in this division is so competitive. We’ve just to make sure we stay in the race until January and then we’ll have a look to see where we are.

“There will be no complacency. I’ll keep driving them on because we’ve set our bar very high.”

Man of the match: Darren Randolph

Ade On The Up »
« Cup Upset Against Swansea- What a Night!

2 thoughts on “Blues bow down to Royals at the Madejski”