A Danny Ings inspired performance guided Burnley to a comfortable 3-0 victory over Birmingham City in a match which has left Blues’ fans worried about the crucial matches in the coming weeks. 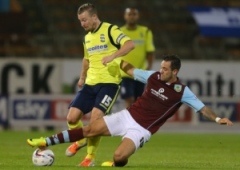 Suspended captain Paul Robinson and midfielder Andrew Shinnie were replaced in the starting line up by Shane Ferguson and Darren Ambrose; with Jonathon Spector pushed into midfielder to create a 4-2-3-1 formation instead of Saturday’s 5-4-1, but the game plan was in pieces after a mere three minutes.

A defence splitting pass by The Claret’s striker Sam Vokes put Ings through on goal with just Darren Randolph to beat.

The former Bournemouth man kept his composure and lobbed the on rushing Blues’ goalkeeper in a way that showed why he is one of the in form players in the Championship at the moment in front of goal.

Despite the fantastic chip by Ings to open the scoring, it was the 21 year olds finishing which let him down minutes later as a low cross from Michael Kightly was hit wide from just six yards out.

Burnley piled on more pressure; however, Lee Clark’s side held on and even created a couple of opportunities themselves prior to the interval.

In typical style, Chris Burke cut in from the right and weaved his way past three Burnley players before hitting a cross-cum-shot that failed to find neither the bottom corner nor the outstretched boot of Lee Novak.

Kyle Bartley also missed the target with a header from a corner, but it was Burnley who held the advantage at half time.

Some Birmingham fans thought their side were still in the dressing room when Scott Arfield, who played under Clark at Huddersfield, doubled the home sides lead 18 seconds into the second half.

Another chance was taken from a cross by Kightly as Arfield headed home at the back post for his first goal of the season.

The only moment to cheers for the 400 travelling Bluenoses was a chance to see 17 year old Reece Brown make his debut as a substitute for Ambrose.

There were some flashes of quality from the midfielder going forward so it will be interesting to see how he develops over the course of the season.

Danny Ings then scored his second of the night to guarantee the three points for Burnley.

The partnership between Ings and Vokes had been excellent all night and the two combined for the third as Vokes’ dummy gave Ings plenty of space to score another composure goal past Randolph for his fifth in seven game this season.

With little time remaining, former Turf Moor favourite Wade Elliott was unlucky to see a long range effort hit the post, but nevertheless, it will be the sides inability to score goals keeping manager Lee Clark awake at night before “must win” home games against struggling Bolton Wanderers, Millwall and Saturday’s match with Sheffield Wednesday.

“There was a small percentage of doom-mongers here who, as soon as Charlie Austin went [to QPR], they were the ‘that’s-it brigade’ – very small, I must say.

“It’s going well for them [the players], well for us, well for the fans, but it’s a constant work in progress, we’re still light in squad numbers and we have to be aware of that.”

“Frustration’s a feeling you have when you think you deserve to get something from a game. Probably the word [I would use] is disappointing because we got what we deserved.

“We didn’t play well enough in every aspect of the game. When you lose goals so quickly in each half it becomes a problem.

“It’s by far and away our most disappointing performance of the season. I take the full responsibility, I’m the leader of the group and I take responsibility for it. We go and push ourselves forward, dust ourselves down and get ready for Saturday.”

Man of the match: Danny Ings 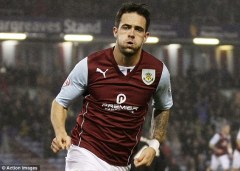