Progression in the Cup Overshadowed by Unsporting Glovers

As the game reached it’s latter stages I was looking forward to writing a match report on a great Birmingham City performance that saw us through to the Capital One Cup Third Round with very little to worry about. Then Yeovil Town scored THAT goal.

The game sparked into life after 20 minutes when an out swinging Neal Eardley corner was met well by Kyle Bartley to put Blues in front.

Within minutes of the restart, Dan Burn fouled James Hayter on the edge of the box, giving Ed Upson the opportunity to equalise, which he duly took as his effort nestled into the top corner.

The away side kept going despite the equaliser and Lee Novak had a great chance one on one with Wayne Hennessey, but the Welsh goalkeeper did enough to narrow the angle and block the shot.

Colin Doyle made a fantastic fingertip save five minutes before half time when Hayter’s effort was set to find the top corner of the Irishman’s goal.

Just before half time Blues were rewarded for their hard work by taking a deserved lead into the break, created by the hard work of Novak. The striker won the ball after chasing down a lost caused from Tom Adeyemi’s long ball up the field, held it up for Chris Burke to cross for Andrew Shinnie to put Birmingham 2-1 up at half time.

Yeovil had a couple of second half chances, but none as big as Hayter’s free header straight at Doyle from only eight yards out.

The controversial moment came just into injury time of the 90 minutes. Dan Burn went down holding his face, following an aerial challenge with Kieffer Moore and Doyle kicked the ball out of play for any treatment the defender might have required. When Yeovil realised the physio wasn’t required they refused to give Birmingham City the ball back and Byron Webster lobbed Doyle from 35 yards.

Lee Clark’s players couldn’t believe the unsporting behaviour of the Yeovil captain and surrounded him and manager Gary Johnson in sheer disbelief of what had happened.

Referee Darren Sheldrake could do nothing about the incident and the game restarted before the game had to be settled by extra time and penalties.

Extra time began and the Blues’ strike force had several chances to regain the lead prior to Luke Ayling scored a stunning long range goal before the end of the first 15 minutes.

When play resumed, The Glovers allowed Lee Novak to walk the ball in for his first goal as a Birmingham player, but would it have gone to extra time if they’d have done this as soon as they’ equalised in the 90 minutes?

Novak then wasted a final chance to seal the win before penalties decided the final outcome.

Chris Burke and Darren Ambrose showed their experience with composed spot kicks either side of misses from Neal Eardley and Scott Allan. Tom Adeyemi took the final penalty with the score at 2-2, score and they’re through, miss and it is sudden death.

He stepped up and hit the post, however, the ball rebounded of Hennessy and went in so Blues progressed in the action packed Capital One Second Round match.

Who said the drama of the Cup has gone?

“I apologised to Lee Clark at half-time in extra-time because, on reflection, it was ungentlemanly.

“However, we get a bit fed up of teams kicking it out for their own players here when we’re trying to get a goal back.

“I think people should look at this. How many teams are going to kick the ball out for their own players in the last minute?

“I apologise to the Birmingham fans, staff and players, but this kind of thing is happening too often at the minute.”

“Without a shadow of a doubt (I will follow it up). I need to check with my admin people, and the board of directors to see what route I go down.

“I thanked Gary Johnson and his staff (for allowing Blues to score, albeit to 15 minutes after the controversial incident) but that just gave us an equaliser whereas we were winning when the initial equaliser went in.

“The players were angry but we got them quickly re-focused, and we got the result that we deserved.

“I’m very proud to be the manager.”

Man of the match: Kyle Bartley 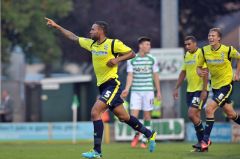 One thought on “Progression in the Cup Overshadowed by Unsporting Glovers”