An early Kyle Bartley goal was enough to send Birmingham City into the second round of the Capital One Cup, following a few scares from League Two side Plymouth Argyle.

Both teams failed to create clear cut chances in the first half with Koby Arthur from long range and Lee Novak, when maybe he could have done better, forcing saves from Plymouth goalkeeper Jake Cole.

The game came into life just minutes after half time when Novak played in Chris Burke who hit the ball over the bar with an open goal from ten yards out.

Scott Allan did eventually put Blues ahead not long after thanks to great composure in the six yard box. Tom Adeyemi made a great run into the Argyle box before putting through Allan in a one-on-one situation with Cole, waited for the goalkeeper to dive and passed the ball into the open net.

The cheer the goal was met with was one more of relief than celebration, but there was still more drama to come. 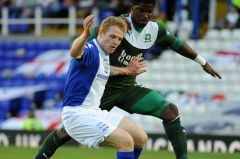 During the next attack, Blues had the opportunity to double their lead when Andre Blackman brought down Burke on the right side of the box and referee Graham Salisbury blew for a penalty. Novak steeped up to take it, but the striker’s spot kick was well saved and cleared by Argyle’s goalkeeper Cole.

Plymouth then scored a sublime goal out of nowhere to equaliser just after the hour mark as Lewis Alessandra found the top corner from 25 yards, leaving Colin Doyle without a chance of saving it.

Doyle then showed great bravery to come out and take the ball from Reuben Reid as the striker looked set to give Plymouth an unlikely lead.

With just under ten minutes to go Allan scored his second of the night to score what Blues’ fans thought would be the winning goal. Shane Ferguson lobbed a cross to the back post where Allan met the cross with a fantastic volley from six yards out.

But in the dying embers of added time in the 90 minutes Kyle Bartley failed to head away a long ball into the box. The ball fell kindly to Alessandra to fire home his second and send the game into extra time.

Lee Clark’s team talk before extra time must have worked as it didn’t take long for the home side to take the lead for a third time. Kyle Bartley made up for his error for Plymouth’s second goal by scoring a powerful volley from a corner taken by Burke.

Birmingham managed to hold on for the rest of extra time without any scares, but for the Blues’ fans that went home disappointed last night: it’s all about getting through to the next round of the cup no matter how difficult they made it for themselves!

“I thought Plymouth were outstanding and caused us problems all night but I’ve got to say that some of those problems were of our own making. It’s tough to say unprofessionalism because we’ve got some kids in there, and I mean proper kids, and they’ve got to learn quickly. We shot ourselves in the foot a few times and thankfully we had enough in our locker to go on and win it. I’m well aware of how the club got there (Wembley) last time when they scraped through against Brentford. We all know what happened after that and I’m hoping history repeats itself.”

“I’m very pleased with the performance. It’s just a shame we didn’t get anything out of the game. The performance was a massive improvement and it’s that level of performance that we have to take into our league programme. The first goal, after the break, we switched off. Our shape was okay and we were defending well, and then five minutes later we go out and concede. Then Jake’s made a great save from the penalty. In extra-time you say: ‘Go on – believe, because we’re right in this game’. But we switched off again. We believed we could get something out of the game, and we came back from behind twice. Even at 3-2, we kept pushing. We weren’t frightened of trying to get the equaliser.”

Man of the match: Scott Allan 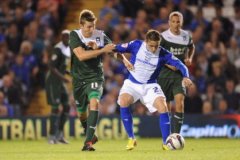