Birmingham v Blackburn memories from a Bluenose in Blackburn

Why do I support Blues? Well to be honest I don’t really know why myself. I mean it’s not like they’re my local team or anything. Born and living 100 miles away in the home of today’s opponents Blackburn I for whatever reason (well my dad really as I just sort of went along with him) deciding to follow Blues. Do I regret that decision? No not one bit, especially when you consider just how much of a mess that Rovers are in. I have received a fair amount of stick at school but it is now my turn to return the favour with the mess that they are in themselves. To you this may be a bit of a nothing game. When you set off walking to St Andrews reflecting on what has been a frustrating campaign to say the least, I will be setting off on my two-hour drive with nervous anticipation to what to me is probably one of our biggest games of the season. I’m sure that you’ll all be fascinated by some of the tales that I have from this fixture so I have decided to share some with you.

Savage & Anderton celebrate after both score

My first game. I set off on the 15-20 minute walk down to Ewood Park but this was for an away game. I had only really just started to take an interest in football and Blues. We actually sat in the home end for this one but it was clear which team that I was supporting. I had the famous blue away kit on from that season tucked well under my coat and scarf (neutral colours, not Birmingham.) The game itself I don’t remember too much about in truth but I remember it being grossly entertaining and the ‘Derby’ day fun had only just begun. I enjoyed being different and I was immediately hooked.

Nicky Butt scored one of the goals

A key game for us at the wrong end of the table. I didn’t actually go to this game (I didn’t have a season ticket back then although the reason why I didn’t purchase a ticket are unknown) but I remember it well. It was around Easter time and I actually remember throwing up almost immediately after the game. Robbie Savage was returning to Stan’s and I was determined to win partly down to that reason. We took the lead through Nicky Butt but before Blackburn equalised before Savage himself equalised for Rovers, making me really unhappy and dreading school the following day as he feared we would go on to lose. Mikael Forsell though came off the bench to fire in a late winner and I actually made me look forward to school.
My joy however was short-lived as that season ultimately ended in
relegation and those irritating school kids having the last laugh.

It was almost a case of déjà vu this time as we again beat Rovers at home towards the end of a Premier League season. Unfortunately though the outcome was the same. Relegation. On the final day we needed to win and hope that Fulham and Reading both dropped points to survive. We did our bit emphatic style (not often you can say that about a game under Big Eck) but with Fulham winning it was us and Reading who both went down on the final day. If we were to win 4-1 today I would tear my class mates to shreds but I couldn’t do that this
time around due to the fact we were relegated. 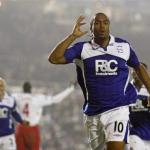 Here I faced possibly the biggest dilemma that a year six pupil could. Did I go to the Blues game or the school Christmas disco? After all it was freezing cold December night and it would be my last ever school Christmas disco at Feniscowles Primary School. Add to the fact that I would have to set off down to Brum at 4 o clock and the game was on Sky Sports and my loyalty is severally put to the test. I decided to go to the game and I was so glad that I did. Two goals courtesy of Cameron Jerome lifted us up to 6th (Yes, 6th!) in the Premier League table and I had good reason to miss the disco. My classmates  probably wished that they had skived school with a ‘Hangover’ the day after.

For me, games vs Blackburn are always special. It creates a unique derby day build up before the game without the local element. The banter is always top draw and even though I was secretly hoping for back-to-back relegation, I really do love playing Rovers, and beating them! For you this game may be nothing more than an end of season fancy dress party. For me though this game is huge. It carries huge bragging rights, similar to those against Wolves and Villa, for not just the victory, but for who finishes above one another in the final league table.

Bye bye Butland – Why Jack will be missed at Birmingham City »
« Lee Clark. Stick or twist?