Give Grassroots Football The Support It Deserves 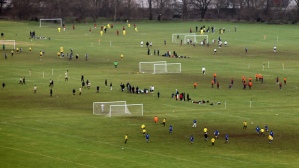 This campaign is not about myself or my junior football club. It is about the future of grassroots football in this country. Since 1966 we have struggled in this country to win at a national level any cup competitions especially the world cup. I personally put this down to where it all starts which is at grassroots level because that is where every premiership player starts their football life. In this country we are struggling to provide the grassroots kids with the facilities they require to be future England stars.

Up and down the country at the weekends teams are struggling with poor pitches and lack of facilities for these kids. An example is my own club Woolton FC Charter Standard Community Club (given this title by the FA) with 55 teams and over 135 4-6 year olds every weekend and we do not even have a toilet. In 2013 it is a disgrace that children all over the country are still having to use the bushes to pee in. So myself and David Crausby Bolton MP have joined together and set an e-petition up. The aim to get 100,000 signatures and call upon the government to look into our request for 7.5% of the premier leagues £5bn deal. Since 1999 the premiership agreed they would contribute 5% of their revenue back into grassroots football. However on investigation they have only ever put 1% in taking away millions and millions from grassroots football. We need to get this money back as soon as possible into grassroots football to prevent our game from dying. As the premiership continues to thrive local authorities are increasing pitch fee hires and cutting back on work done on local pitches and this is driving some of the grassroots teams out of the game. With this e-petition and our request we hope to secure the future of every child up and down the country to play football. With everybody’s help in the football world we will easily pass our target of 100,000 signatures. Every club out there has to realise that without grassroots football they will have no future Gerrard’s, Lampard’s or Rooney’s so they need to invest more money back into the greatest game ever and NOT LET GRASSROOTS FOOTBALL DIE. Hopefully everyone will sign the e-petition link below and please forward the link to all involved in our great game. Cheers Kenny

The State of some of the pitches and facilities some clubs have to put up with across the country can be seen in the pictures with your help and support things can change for the better.