Determination, effort and organisation are things that both sides had in abundance at St. Andrews last night. But neither team had the quality to break the other down in a game of few chances. 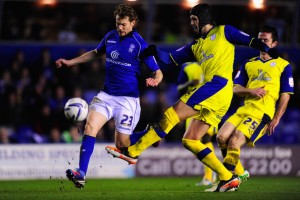 Nikola Zigic was recalled to the starting eleven after being left out against Watford, and although he adapted himself well effort wise, he should have won the game for Lee Clark’s men but missed an absolute sitter from four yards. The first half was a bit of a snore fest with the defenders coming out on top. But Blues’ midfield looked a lot tougher to beat with Jonathan Spector being the outstanding performer alongside Calllum Reilly.

A massive plus is the clean sheet, only Blues’ fourth of the campaign, and their first goalless draw for more than a year. However, when push comes to shove, they created very little for the entirety of the game, bar a fifteen minute spell in the second half in which they had Wednesday under the cosh. The biggest criticism of the night would be the changes that should have been made during this spell. With Blues enjoying easily their best spell of the game, you felt a bit of pace from either Nathan Redmond or Rob Hall could have turned the tide, with the visitors midfield tiring. As it was, Clark left it and left it and left it…until the 83rd minute when he introduced Peter Lovenkrands in place of the ineffective Marlon King. It was too late as by the time the Dane had taken to the field, all the hosts’ momentum had evaporated. So for this, I criticise Clark. The game was there for the taking, and a bit of foresight could have made sure of the points… I’m not even saying this in hindsight either as I repeatedly said to those around me “we need some pace now while we’re on top”.

It was a case of two poor-average teams who should both have just about enough to survive, even if by the skin of their teeth. I have criticised, now I will praise. The back four looked decent, although Wednesday’s strikers Leroy Lita (remember him?) and Connor Wickham weren’t offering a great deal. Mitchell Hancox in particular deserves a mention after he made three vital tackles to thwart any danger, one in the dying minutes. And ensuring Blues kept ticking over was Spector. The American was here, there and everywhere, forwards and backwards, he stifled the visitors when defending and tried to illustrate some sort of danger when attacking. His positioning was impeccable and he was rarely beaten to a ball.

We also have Jack Butland to thank for pulling off another world-class save in the 11th minute, clawing back Miguel Llera’s header. He has saved Blues plenty of times this term, so for that I will be grateful. But his kicking is woeful. Think Maik Taylor’s kicking, but worse. But that can be forgiven.

A number of times Chris Burke and Paul Caddis strode forward only to be held off by the defenders. But a couple of times Burke did get beyond the full-back and swing in a cross, but as has been the case too often this season, no-one was in the box, which is unusual with King on the pitch.

Clark said in his post-match interview that he thought Blues looked solid (agreed) and that we created lots of chances (what???). On one hand, it was pleasing to see eleven blue shirts scrapping for each other and looking like they want to be there, but what chances did Clark see? Other than two or three half chances and Zigic’s sitter, I don’t remember many. Maybe Clark was playing Football Manager on his smart phone.

Talking of Zigic’s sitter, admittedly it came at him with pace, but a better striker (ie King) maybe could have anticipated the cross more. When the Serb connected with the ball, his body was incorrectly shaped to make any use of it and he bundled it wide. King’s only sniff at goal was in the opening minutes when he spotted Chris Kirkland off his line and tried a delicate lob only for the former Liverpool ‘keeper to chase back and claim the ball.

Blues travel to Peterborough on Saturday in another six pointer. Although we have only lost one out of the last seven, too many draws have crept in again. With The Posh thumping Millwall 5-1 at the New Den last night, they will be fired up. It will be a very tough game indeed.