Support Clark (for now, at least)

After our abysmal performance in the home defeat to Watford, my long-term backing for Lee Clark has pretty much run out. Although once I heard that neither King nor Zigic would play, I expected us to lose perhaps by more than one goal. I also expected a display that showed some proper marking in defence, battling qualities in what would be a tough match-up in midfield and a desire to make things happen up front. We showed none of this consistently, which has made me question Clark’s ability more than ever.

Maybe I’m overreacting to one bad result – against a very good Watford side that is going places this season – because the form up to this point has been good. Before the match kicked off, we were unbeaten in the league since New Years’ Day (though many of those matches were draws) and had taken 7pts from our last 3. And, perhaps if we can take 4pts from our next two important matches in terms of the relegation picture, I’ll feel slightly differently.

There are arguments in Clark’s favour I think, and would strongly disagree with people who say that the club’s failures this season are entirely Clark’s fault. Most of these people’s arguments are: “Clark inherited a squad under Chris Hughton, which finished 4th in the Championship and nearly qualified for the knockout stages of the Europa League, and if anything he strengthened it in the summer. We haven’t had to play in European games on Thursday nights this season. He appears tactically inept, making strange substitutions and he makes baffling comments to the media. Where has Keith Fahey gone? Why has he not been able to motivate Zigic to play? He’s often favoured youth players over senior players, is it because he’s lost the respect of the senior players and is hiding behind the youngsters? The financial uncertainty with the board is the same as it was last year. Therefore, the problem must be with the manager.”

I wouldn’t entirely disagree with this, but would challenge a few things. First things first, I think we were incredibly lucky to have Chris Hughton, let’s not forget that. Very few managers would be able to do what Hughton did for the club, and if you compare Hughton to Clark, Clark will always look like a dreadful manager. I think you put most managers in Clark’s position, and they wouldn’t be able to do too much better.

We’ve had no Carr or Murphy this season, and Spector has picked up several injuries. Zigic and King have been injured at times, as have many other players in the squad intermittently. Keith Fahey has been in rehabilitation for a long period, I think we’ve had a fairly high turnover of players. Ridgewell, Wood and Beausejour left in January last season, N’Daw and Mutch left in the summer. Rooney went on a loan swap with Swindon for Caddis, we’ve brought in Mullins, Lovenkrands and Ambrose in the summer. Since the summer, we’ve signed Robinson and Diop on short-term contracts, Morrison, Hall and Thomas on loan. In addition, until the end of last season we had Huseklepp and Townsend and Ramage on loan, and we no longer have Myhill in goal. It’s not quite the same squad is it?

However, if I’m going to point out that the turnover of playing staff hasn’t been low, I must also accept that Clark’s replacement signings have been relatively poor. Mullins goes no length towards replacing N’Daw or Mutch in my opinion. Lovenkrands, although I think his Premiership experience has been a disadvantage, because he often plays overly ambitious through passes, you’d have to accept that he’s been disappointing. Ambrose has been injured too often to comment on. The signings of Diop and Robinson were very much ‘hand-to-mouth’ transfers, and required less juddgement from Clark, it was just a case of grabbing who we could find with some experience to fill the voids. Caddis has been quite impressive. I would say that although Clark’s signings haven’t been as bad as some suggest in my opinion, they haven’t been able to replace some of the departures under Hughton.

Clark’s main problem is his inexperience, at times he seems tactically inept. He picks questionable teams, makes strange substitutions and trusts the young players to an extent to which you wonder if he has in fact lost the respect of the senior players. Watford was a good example of this. He played a 4-4-2, which I though was a poor formation choice. Against a team so good when they are given time and space on the counter, and with few promising forward options, a more experienced manager would have gone for 4-5-1 in this match. It would have crammed the midfield so Watford wouldn’t have been able to play their passing game, but Clark went for 4 in midfield, and the Hornets could get at our defence quite easily. Then, with half an hour to go, he took off Paul Robinson who didn’t seem to have picked up a knock, and put on Mitch Hancox. What would that do? His substitutions inspire little confidence in me, in his ability as a manager. 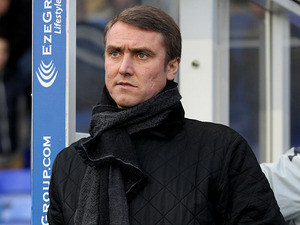 He also makes baffling comments to the media. Before the Burnley home game I think it was, he mentioned on the fact he was playing a lot of kids, that they were still in their nappies! That’s quite a disparaging comment to make really; surely you’d want to encourage the players? After the win at Leeds on his birthday, he’s said: ‘the beer will taster sweeter tonight’. How is that going to get the message across that he’s a competent manager? He’s made several more comments to the media, including a lot of apologies and almost grovelling, in some of the defeats early on in the season.

It’s clear that Clark’s circumstances, especially with the debt and 19 first team players out of contract in the summer, haven’t helped him yet he hasn’t helped himself! He’s shown little tactical nous, and he doesn’t seem to have commanded the full respect of his players.

I don’t think any other manager could do a dramatically better job. I believe all things considered, with a good manager the squad we have under the conditions are capable of a midtable finish, so it’s unsatisfactory that we are near the relegation zone.

However, I don’t think starting any ‘Clark out’ campaigns at this stage will do the club any good, for the following 3 reasons:

1)      If we started chanting ‘Clark out’ at matches, that would create a very difficult environment for the team to play in. Performances would drop, and so, at least in the short-term, would our results. Baring in mind that we are in a relegation battle, a very close relegation battle, in which each of the teams in the drop zone are beginning to find some form, this is the last thing we need.

2)      Pannu probably wouldn’t listen to us. I think he’s in too close contact with Carson Yeung to care about our club, in my opinion. If so, I think he would have sacked Clark earlier, but also he probably doesn’t want to pay out his contract, even if it’s only on a 1 year deal. I think Clark is here to stay, and whinging about it won’t do any good. If anything it’s going to divide the fans at a time when we ALL need to stick together.

3)      Who would we get instead? If we did manage to get rid of Clark this season, I’m not sure the potential reward would be worth the risk. I don’t think many experienced managers would want the job. Birmingham City isn’t a club where the infrastructure is there and it is capable of being a Premiership club, it only needs a manager to get the best out of the squad- the reality is it’s a complete rebuilding process. We’re much more likely to be playing in League 1 before we’re ever back in the Premiership, and I don’t think myself that a manager – like Owen Coyle has been suggested – would want to take on a challenge like that, they would want to try and manage in the Premiership.

Some people are, nonsensically in my opinion, saying that we should sack Clark and get in a young manager like Geoff Horsefield or Michael Johnson, “at least then we’d see some passion”. I wholly disagree with that. Clark’s problem is not lack of passion, he clearly cares about the club a lot, it’s lack of experience. Some people are defeating the purpose of their own arguments by saying that Clark is out of his depth, and then suggesting we get in another inexperienced manager.

For me, the answer is to unite behind Clark, for now. The rebuilding of this club is going to be difficult and it’s about damage limitation. We must avoid another relegation, to enable us to attract new owners and then we can plan ahead, and think about getting rid of Clark. Until that happens, Clark is here to stay whether we like him or not, and we need to get behind him.

The Ex-Files: Danny Sonner »
« Summer of change is essential

6 thoughts on “Support Clark (for now, at least)”