With Blues going through a period of “transition”, for want of a better, less offensive word, it’s reassuring to look back at a more stable period for the club. Before Carson Yeung, and before the club began yoyo-ing between the top two divisions, Steve Bruce managed to cement Blues’ status as a top flight club. Many players came and went between during Bruce’s reign, but one player who exemplified the period of prosperity at St. Andrews was stalwart goalkeeper Maik Taylor.

Born to a German mother and a British military father, Taylor grew up in a town called Nienberg, playing for the local team at youth level. When his family moved back to the UK, the young goalkeeper followed in his father’s footsteps and joined the Royal Electrical Military Engineers, playing semi-professionally in his spare time. He played for both Petersfield Town and Basingstoke Town, before joining now defunct Farnborough Town in the Southern Premier Division, leading them to the league title in 1994.

Taylor’s professional career began as a 24 year old, when he was signed by Third Division Barnet for a fee of around £700. He spent 18 months at the Underhill Stadium, impressing enough in his 70 appearances to warrant a move to Premier League Southampton, where Graeme Souness made him first choice for the remainder of the 1996/97 season. However, the team only managed to survive by a single point, and Souness left in the summer to be replaced by Dave Jones. The new manager replaced Taylor with Paul Jones, who went on to play nearly 200 games for The Saints.

November 1997 saw the 6’4” shot-stopper move to Fulham in the Second Division, where he stayed for seven years, helping The Cottagers to win both their Second and First Division titles, and earning his first international call up to the Northern Ireland squad in 1999. Taylor was first choice between the sticks for the majority of his time at Craven Cottage, until they reached the Premier League and Edwin Van der Sar was brought in, and after 189 league appearances, he was sent out on loan to Blues. 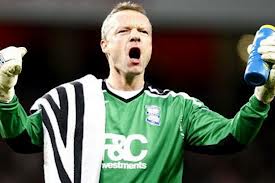 After making 27 appearances during his loan spell, Blues make the ‘keeper’s deal permanent for a fee of £1.5million, and he spent seven seasons at the club. Despite a brief period at the end of the 2006/07 season when Colin Doyle took his starting spot, he was more or less ever present for Blues until Joe Hart was signed up on loan. His first year at the club saw him nominated for the PFA Team of the Year, losing out narrowly to Tim Howard, and he became a consistent performer, making 187 league appearances in total for the club. The 2008/09 season would prove to be Taylor’s last as a first team regular, and he only missed one game through suspension. Despite only making two league appearances in 2009/10, against Hart’s parent club Manchester City, and then the signing of Ben Foster, Taylor signed a one year contract extension for the 2010/11 season. Spending most of the season on the bench, the Blues number one only made four cup appearances, and was among the substitutes for the famous Carling Cup Final victory.

Upon leaving Blues, Taylor signed a one year deal with Leeds United for the 2011/12 season. He failed to make any appearances though, and was sent to Millwall on loan for 6 months in January, where he made 10 appearances. Millwall offered him a permanent deal last September, and he has played 6 games so far this season.

Renowned for his ability to command the penalty area, Taylor played a key role in keeping Blues in the top flight between 2003 and 2005, and was instrumental in both promotion campaigns in 2006/07 and 2008/09. He has represented Northern Ireland 88 times, and despite being in the twilight of his career, he still looks assured playing at Championship level. Perhaps not remembered as the most spectacular signing of Steve Bruce’s tenure at the club, Maik Taylor played an integral part in one of the most succesful periods of Blues’ recent history, and although perhaps not considered a ‘legend’, the Northern Irish international’s career at the club is a reminder of better and more successful times at St. Andrews.

Dream the unexpected »
« Eck, look at what you could have had!

One thought on “The Ex-Files: Maik Taylor”