After guiding Blues to their highest ever league finish in decades, McLeish acted in the transfer market to bring in Ben Foster, Nikola Zigic and Enric Valles. Eventually they were followed by Martin Jiranek, Jean Beausejour, Matt Derbyshire (loan) and Alexander Hleb (loan). The latter was greeted with amazement. Hleb, joining Blues? Was McLeish turning Blues into a sought-after side?  No-one could anticipate what was to come over the next season.

August was a steady month. After finding themselves two-down at Sunderland, Blues fought back to earn a 2-2 draw. This result was followed up with a 2-1 win at home to Blackburn and a solid 2-2 draw away at Bolton.

September was the start of what was to be- but without a crystal ball, it was put down as a blip. Two goalless home draws (Liverpool, Wigan) and a 3-1 defeat away to West Brom, the fans were treated to just one goal scored and two points. The problem looked to be the goalscoring. Blues were creating chances but not finishing them.

A few months on (after victories in the League Cup to Rochdale, MK Dons and Brentford courtesy of an injury time Kevin Phillips goal) Blues were handed a quarter-final tie at home to Aston Villa. A Seb Larsson goal was cancelled out by Gabby Agbonlahor, before Zigic’s tackle-come-shot flew past Brad Freidel and sent Blues into the semi-final.

But despite losing the first leg at West Ham, the biggest problem came at half-time as Scott Dann was substituted after lengthy treatment. I honestly feel 100% that he was difference between going down and staying up. Dann would have saved us five, six, seven points. Shoulda, woulda, coulda.

Blues went on to qualify for the final after beating the Hammers 3-1 in the second leg and could now look forward to a major cup final.

In between the semi-final and the final, Blues won two, drew one and lost one of their league games. The theory that Blues’ league form was affected as they had the Carling Cup final on their mind was nonsense, as the results suggest.

The mid-week before the cup final, The Sun printed “Arsenal are still in the run-in for four major trophies this season as the Carling Cup is as good as in the bag as they will beat Birmingham on Sunday”. Oh how arrogant. Typical of the national media. How wrong could they be? Very!

In the final, Blues deserved it. The work and effort they put in was extraordinary and they missed chances as well as Arsenal. Zigic put Blues one-up before Robin Van Persie levelled.Then, with extra time looming, Obafemi Martins capitalised on a defender-keeper mix up and slid the ball in…Blues winning 2-1 in the dying minutes of a major cup final? You better believe it! We all watched with streams of tears as Stephen Carr lifted the glistening trophy. No longer were Blues a complete failure. No longer could people throw “you’ve never won f*ck all” in our faces. We were Carling Cup champions and as a result, we were a European side!

But that is where all the joy ended. 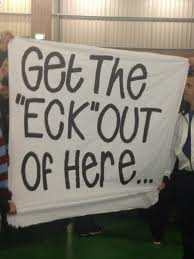 From the cup final to the end of the season, Blues won only TWO league games and were relegated at Tottenham on the final day. What a come-down. To be flying so high and then to be smashed back down to earth was….well… typical Blues!

In his time at the club, McLeish led Blues to their highest finish in decades and their first major trophy for decades, and only their second of all time. We weren’t blessed with smooth, passing and attacking football, but we had won something. Then, our limitations were realised.

The most common questions we have all been asked since that marvellous day:

Did winning the cup take so much out of your players that you were relegated? YES
Would you rather have stayed up and lost the final? NO
What was the biggest factor in your downfall? I said i earlier, losing Dann!

Alex McLeish came out in the media and stated that he wanted to get Blues back to where they belonged. The board replied “ok, do it one year or you’re sacked”.

Than, after numerous meetings, Big Eck resigned. What happened? The reasons for his resignation have never been disclosed, and we will probably never find out the depth of that conversation. He has since gone on record to say “I would have stayed at Birmingham for 10 years if I could”. There’s more to it than what meets the eye and to blame McLeish solely for the fall from grace is a tad harsh. He was probably made aware that he had to work under very tight restrictions, similar to what Chris Hughton did and more so, what Lee Clark has to now.

The he went to Villa… what was he thinking? All the respect from the Bluenoses went out of the window, Villa were never ever going to accept him.

But I have since taken a step back and thought logically about it all. McLeish would have led us to a similar finish as Hughton did. But the Villa fans blame him for their own recent misery. I’m sorry, but they were in a relegation scrap under Gerard Houllier, long before Eck’s ginger hair took to the Witton dugout. He just didn’t improve it.

I have no qualms with Eck’s time at Blues. I think he did the best he could and cared a great deal. But when he went to Villa, he took his respect with him. The cup feat was now despite him, rather than because of him.

He was recently appointed Nottingham Forest manager. Their fans weren’t happy about it either. Who were they expecting, Arsene Wenger? Forest are similar to the Vile in thinking that their once famous club is still famous. It isn’t. Alex will do a great job at Forest in my opinion. But like his time at Rangers, Blues and Villa-the football won’t be the prettiest on the eye, but he will get results.

One returns, one remains »
« Dawson to be a blue?