Delfouneso in squad to face Clarets 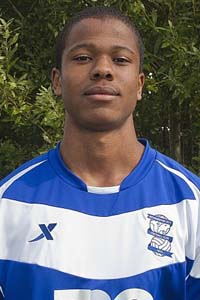 Blues manager Lee Clark has confirmed at today’s press conference that youngster Emmit Delfouneso will be in the squad for the home clash with Burnley on Saturday.

The 18 year-old, brother of Aston Villa’s Nathan (currently on loan at Blackpool) has impressed in the Blues development team and is one of eight teenagers in Saturday’s squad.

Clark has spoke of his intention to bring through the club’s ‘quality’ youth players, and it has been noticed in many quarters that the current crop are the best bunch the club has had for a long time. Mitch Hancox, Callum Reilly, Akwasi Asante and Will Packwood are all highly rated and on the fringes of the first team. Nathan Redmond is more established, but still a teenager and loanee Rob Hall and Jack Butland (who has an England cap) are still only 19.

Packwood has a handful of appearances under his belt this term and Reilly made his first start against Crystal Palace last weekend, and he impressed in his partnership with Papa Bouba Diop, earning man of the match in some reports.

With the financial state of Birmingham City and parent company BIHL, it is refreshing to see the potential of the youngsters coming through.

Against Palace, Blues battled back from two goals down to earn a point thanks to goals from Nikola Zigic and Diop. A home win is vital this Saturday.

One thought on “Delfouneso in squad to face Clarets”